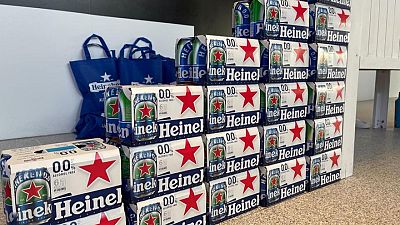 BRUSSELS – Dutch brewing giant Heineken reported a steeper than expected decline in third-quarter beer sales on Wednesday after COVID-19 restrictions cut volumes in Vietnam, one of its top three markets, by more than half.

The world’s second-largest brewer said it sold 5.1% less beer on a like-for-like basis than a year earlier, with Asia-Pacific sales down 37.4% as COVID-19 restrictions hit Cambodia, Indonesia, Malaysia and Vietnam.

The average estimate in a company-compiled poll of analysts was for a 2.3% overall decline, with the Asia-Pacific region down 25.6% and modest growth in Africa, the Middle East and Europe.

The maker of Europe’s top-selling beer, Heineken, and Tiger and Sol lagers retained its forecast of full-year results finishing below those of pre-pandemic 2019.

Vietnam, consistently one of Asia’s fastest-growing economies, suffered a record contraction in the third quarter as an outbreak of the Delta variant of the coronavirus led to a strict lockdown in the commercial hub of Ho Chi Minh City.

The city’s lockdown started to ease this month, and though bars remain closed, Heineken Chief Executive Dolf van den Brink said there are signs of recovery in the Asia-Pacific region

Rivals Anheuser-Busch InBev and Carlsberg provide updates on the third quarter on Thursday.