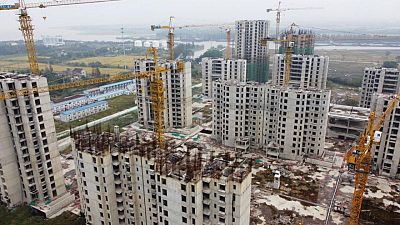 By Scott Murdoch and Karin Strohecker

HONGKONG – China property companies could be locked out of offshore debt markets until early next year as global investors wait on the sidelines for embattled China Evergrande Group to work out its debt woes, fund managers and advisors said.

Even though Evergrande confounded market expectations by delivering $83.5 million to its Citibank trustee on Thursday to pay a bond coupon originally due on Sept. 23 and stave off imminent default, the move will do little to calm nervous property market investors, they added.

Instead, markets are likely to remain fractured which could lead to more asset sales and a scramble to lock in expensive private fund raising by lower-rated companies looking to refinance debt and avoid their own defaults in the next year.

“We may need to wait for full year results which likely happen at the end of the first quarter next year as investors will need to see how…tight the financials of the property developers are,” PineBridge Investment’s Arthur Lau said.

While Evergrande’s payment was a positive, it still needs to make overdue coupon payments of $195 million, with the next major deadlines to avoid default on Oct. 29 and Nov. 10. It then has a further $340 million of coupon payments due on its offshore bonds between Nov. 1 and Dec. 28.

Lau said investors would be closely monitoring Chinese property sales, adding he expected capital markets to reopen at best in the first quarter.

“We do expect few more defaults before year end so it’s hard to have (developers) come to market with such backdrop.”

The real estate sector accounts for a quarter of China’s overall bond stock and more than half of its high yield debt, according to JPMorgan. The sector also has the highest share of high yield bonds at 69%.

Nearly $322 billion worth of bonds from mainland Chinese companies, in various currencies, are due to expire in the current quarter, according to Refinitiv, or 1,251 issues.

Over the next 12 months, China’s property sector alone has $28.3 billion worth of offshore debt due. The largest before the end of 2021 is Shui On Development’s $500 million deal in late November.

Fantasia Holdings Group Co., which missed a $206 million bond repayment in early October, has nearly $420 million worth of bonds maturing in mid-December.

“Property companies were very active in the U.S. dollar bond market because of the lower interest rates that were on offer, but going forward it will depend on how international investors look at this sector,” BOCOM International’s head of research Hong Hao said.

“There are some high risk investors still interested, but the dynamics of the Chinese property market have changed.”

A slowdown in debt issuance from the sector is already evident, with China’s property developers issuing just $2.7 billion worth of offshore bonds in the third quarter, Refinitiv showed, the lowest quarterly amount since the end of 2017.

There has been little sign of a turnaround in October.

“Right now, it would be very challenging for any China property issuers to access the bond market,” said Soo Chong Lim at JPMorgan, who expects more defaults over the next few months.

She would like to see some “signaling from the central government on stabilising both funding conditions and the physical market before tip-toeing back into the lower part of the credit curve.”

JPMorgan calculates that the year-to-date default rate for China’s high yield market stood at 5.2% and for high yield in the property sectors at 6.7% – both record highs.

Herbert Smith Freehills partner Alexander Aitken said the property firms were facing a loss of investor confidence which was unlikely to be resolved in the near-term.

“It could be tough for high yield Chinese property issuers with their usual investor community because we can already see bond yields rising very substantially,” he said.

“The interesting question is whether the current situation will be restricted to the property sector or start to spread more broadly into the Chinese credit market.”