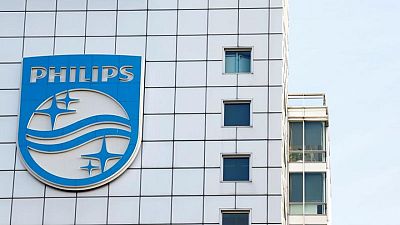 AMSTERDAM – Dutch health technology company Philips on Monday cut its outlook for sales and profit growth this year and said the global supply chain problems that added to its growing list of worries in the third quarter would likely intensify.

Amsterdam-based Philips said comparable sales dropped 7.6% in the July-September period to 4.2 billion euros ($4.9 billion) as a shortage of electronic components such as memory chips and a lack of shipping containers hampered production and delivery.

Memory chip producers were not able to keep up with Philips’ increased demand, Van Houten said, with orders for its products ranging from electric toothbrushes to patient monitoring systems rising 17% last quarter.

“We expect the port congestion to be temporary, while it could take until the second half of next year to get the shortage of chips under control”, Van Houten said.

Although the issues will probably still hit sales into 2022, Van Houten said he expected growth to return in the course of next year.

Philips shares fell almost 1% in early trading in Amsterdam, having already lost around a fifth of their value since the company recalled millions of respiratory devices in June.

It has set aside 500 million euros to repair or replace the popular machines used mainly for the treatment of sleep apnea.

The amount does not, however, cover the possible costs of litigation, with Philips facing more than a hundred class action suits from worried patients, some of whom have said degrading foam in the devices could cause cancer or other health issues.

Van Houten said it was still too early to estimate the costs of litigation, as Philips was working with experts to determine the actual health risks from the degrading foam, something that wasn’t expected to be known until some point next year.

The recall and supply chain problems pushed adjusted earnings before interest, taxes and amortisation (EBITA) down 25% in the third quarter to 512 million euros, slightly above analysts’ expectations.