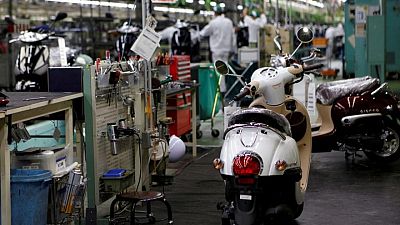 TOKYO – Japanese manufacturers have become less positive about business conditions whereas the service-sector outlook improved to a level not seen since the start of the coronavirus pandemic, showed the Reuters Tankan poll for October.

Manufacturers were the least optimistic in six months while service-sector mood remained in contraction, as Japan’s economy faces the impact of a global chip shortage and surging raw material costs.

The monthly poll, which tracks the Bank of Japan’s (BOJ) closely watched “tankan” quarterly survey, found confidence was likely to stay positive for manufacturers and rise sharply for non-manufacturers over the coming three months.

The poll of 503 big and mid-sized companies conducted from Sept. 29 to Oct. 8, of which 267 responded, showed a mixed picture, with some firms struggling to shake off pandemic drag while others were benefiting from strong global demand.

“While business hasn’t returned to what it was before the coronavirus, the worst of the pandemic is over and conditions are on a recovery trend,” said a manager at a precision machinery maker.

The Reuters Tankan sentiment index for manufacturers fell to 16 in October from 18 a month earlier – its lowest since April – while the service index rose to minus 1 from minus 2.

The Reuters Tankan showed firms were suffering from surging raw material and energy prices, which are pressuring corporate profit margins in the world’s third-largest economy.

“Spending on food is starting to slow,” a manager at a food manufacturer wrote in the survey.

“While raw material prices are surging, it’s not being reflected in sales prices as consumers’ deflationary mindset remains strong.”

The Reuters Tankan showed the global chip and parts shortage weighed heavily on manufacturers’ business conditions, especially among automakers, with the autos/transport equipment sector reading dropping to -31 in October from -14 in September.

“Demand for semiconductor-related products is strong but we’re being impacted by production cuts at car companies and firms making factory machinery,” said a manager at a rubber manufacturer.

Others, such as steel makers, also said they were seeing orders decrease due to the semiconductor shortage.