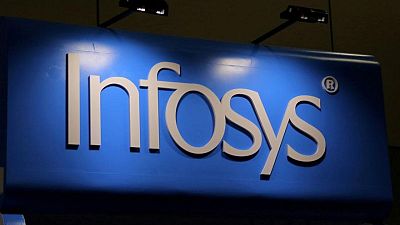 “The (deal) pipeline looks really strong and robust,” Chief Executive Salil Parekh told a news conference. “That (the outlook) gives us a way to demonstrate that we are confident that the growth is looking good in the coming quarters.”

U.S.-listed shares of Infosys were up 4% in premarket trading as it also beat market estimates for quarterly consolidated net profit with a nearly 12% jump to 54.21 billion rupees ($719.48 million). Its revenue from operations leaped 20.5%.

India’s $194 billion IT services sector has won large contracts over the past year as companies invest in services such as cloud computing, digital payments and cybersecurity.

But signs have started to emerge of a slowdown from the peak recorded last year. Infosys said large deal signings dropped to $2.15 billion in the quarter ended Sept. 30, from $2.6 billion in the June quarter and $3.15 billion a year earlier.

Grappling with a talent war in the sector, Infosys said it planned to hire 45,000 college graduates this year after the voluntary attrition rate for its IT services segment surged to 20.1% in the quarter from 12.8% a year earlier.