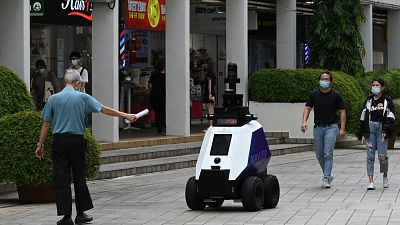 A man gestures to an autonomous robot named "Xavier" as it patrols a shopping and residential district in Singapore.   -   Copyright  ROSLAN RAHMAN/AFP
By Julie Gaubert  with AFP  •  Updated: 17/12/2021

There are new sheriffs in town in Singapore, and they are unnerving many who live there.

Called "Xavier," the robots are equipped with seven cameras that enable them to detect "undesirable social behaviour," for instance if you incorrectly park your bike, if you smoke in an unauthorised area or if social distancing is not being respected.

According to project manager Michael Lim, these machines are a new weapon against insecurity.

"If the robot is around and something happens, the people in the control room will have a trace and will be able to see what happened”, he said.

The robots initially patrolled a housing estate and a shopping centre as part of a 3-week trial in September.

So far, they are dividing public opinion.

"I think it's good from a security perspective, to ensure safety in the society, so if anything happens, you still got the footage to trackback," Fu Suan Kian, an engineer, told AFP.

"It reminds me of Robocop," said Frannie Teo, a 34-year-old research assistant, who was walking through the shopping centre.

"It brings to mind a dystopian world of robots... I'm just a bit hesitant about that kind of concept," she added.

Singapore is frequently criticised for curbing civil liberties and people are accustomed to tight controls, but there is still growing unease at intrusive tech, according to AFP.

The island of 5.5 million inhabitants has seen an arsenal of surveillance technology installed in the streets across the tightly controlled city-state.

It already has some 90,000 police cameras - a number set to double by 2030 - in place and appears to be on the lookout for the newest technologies, such as facial recognition devices installed on lampposts, to help authorities pick out faces in a crowd.

"It all contributes to the sense people... need to watch what they say and what they do in Singapore to a far greater extent than they would in other countries," she said.

"It's (the robot) dystopian because of the extent to which we are visibly surveilled. But I think that what's more dystopian for me is that it is normalised and that people are not responding much to this at all".

The government’s response to the patrolling robots is a need to address an impending labour shortage as the population ages.

"The workforce is actually shrinking," explained Ong Ka Hing, from the government agency that developed the Xavier robots, adding they could help reduce the number of officers needed for foot patrols.

Singapore is not the first country in which robots are being used to by law enforcement.

In Hawaii, police in Honolulu have been using a robot dog to take homeless people's temperatures. It's a safer way to check for COVID-19 symptoms, authorities said.

But again, these robots have not been met with much enthusiasm from the public with local civil rights advocates decrying the use of robots as dehumanising for some of Honolulu's most vulnerable residents.