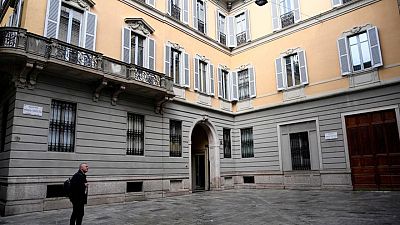 By Gianluca Semeraro and Valentina Za

MILAN – Mediobanca on Friday endorsed a request by its top shareholder Leonardo Del Vecchio to ditch a rule reserving up to three board seats to managers of the Italian merchant bank.

Welcoming the decision “with deep satisfaction,” Del Vecchio in turn withdrew a second proposal to amend the company’s bylaws, which had been criticised by Mediobanca’s board.

Mediobanca also complained that Del Vecchio had failed to discuss with the company proposals he wanted to put to a shareholder vote at the Oct. 28 general meeting, disregarding what is considered standard practice for listed companies.

Del Vecchio last month proposed modifying Mediobanca’s governance rules to make the board more diverse and independent from management, in his first formal move to promote changes at the group since becoming its single largest investor.

The 86-year-old founder of spectacles giant Luxottica bought 19% of Mediobanca after gaining clearance from European regulators on the condition that he would not interfere with the running of the bank.

Del Vecchio in the past has been critical of the strategy of Mediobanca CEO Alberto Nagel, although he has praised Nagel’s latest business plan.

The two are also embroiled in a governance tussle at Generali, Italy’s biggest insurer, in which both Del Vecchio and Mediobanca are investors.

Mediobanca said that while the company had benefited from having top managers among its directors, this was a statutory requirement it had been planning to axe next year in light of discussions with institutional investors and shareholder advisory firms.

Mediobanca was critical of Del Vecchio’s second proposal, which it said risked penalising institutional investors that own half of Mediobanca.

Del Vecchio’s holding company, Delfin, said late on Friday it would withdraw the proposal to avoid confusing investors, given that Mediobanca’s board had decided to present an alternative proposal if the one by Del Vecchio was rejected.

At present, a majority of Mediobanca’s directors come from the list that gets the most votes from shareholders, with two seats reserved for the second most-voted list.

Del Vecchio had proposed increasing to three or four the number of seats reserved for the minority lists, which would each appoint a director based on the number of votes, provided they cross a 5% threshold.

Under the alternative proposal by Mediobanca’s board, a fifth of directors would come from minority lists, with at least one seat reserved for representatives of institutional investors. The 5% threshold would be lowered to 2%.

“Delfin has finally been able to set in motion a process to improve Mediobanca’s governance … to increase management’s accountability,” Delfin said.

“In light of this fundamental result, while Delfin believes its proposal is preferable … it is in the interest of the bank and its shareholders … that only the board’s proposal get put to shareholders.”