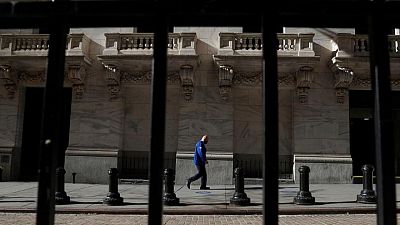 A look at the day ahead from Sujata Rao

All’s well. At least until December 3 when the U.S. Treasury will again bump up against the newly raised debt ceiling, allowing Congress to put markets through the ‘will-they, won’t they’ agony yet again.

And European gas prices are now around a third off peaks hit earlier this week, though they still are up some 300% on the year.

Still, it’s enough to put markets in a better mood — world stocks enjoyed their biggest daily bounce on Thursday since May while 10-year Treasury yields soared on Friday to 1.6%, four-month highs. Chinese shares rose too as Caixin PMIs showed an expansion in September services activity (after an August dip).

The gains rippled into the commodity complex and commodity currencies such as the Australian dollar too, though the momentum is starting to fizzle now with Wall Street looking set for a flat open and European futures a touch lower.

All eyes now turn to the 1230 GMT release of the U.S. payrolls data, which a Reuters poll predicted will show 500,000 jobs added in September.

Remember what Fed boss Jerome Powell said last month — that he didn’t need “a knockout great super-strong employment report” to feel that conditions had been met to taper stimulus. Chances are the data won’t do much to knock the Fed off its tapering course.

There are obviously other issues clouding the outlook. Gas prices may be down but oil continues to climb with Brent now almost $83 a barrel. At what point does it start to impact world growth?

Then there’s the Evergrande saga, which on Friday again hit bonds and shares of Chinese property firms.

Key developments that should provide more direction to markets on Friday: