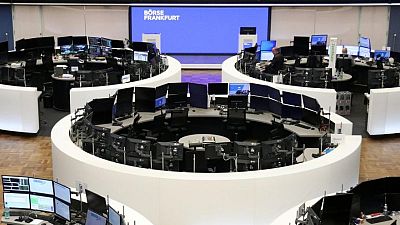 – European stocks marked their best showing since July on Thursday, as easing oil and gas prices offered relief to investors worried about runaway inflation, while positive earnings updates added to the upbeat sentiment.

The pan-European STOXX 600 index rose 1.6% to reverse weekly losses, with buying seen across all sectors. The energy sector gained the least, up 0.2%.

However, oil prices dropped for a second session after an unexpected rise in U.S. crude stocks, and European gas futures fell back from record highs as Russian President Vladimir Putin said Russia would boost gas supplies to Europe amid an energy crunch. [O/R]

But strategists at UBS warned Russia’s supplies may not have a lasting impact in taming prices.

“Russian gas exports to Europe are already running at elevated levels, and we think it’s difficult for Russia to accelerate its shipments further in time for the European winter season,” UBS said.

The auto and parts sector jumped 3.2% for its best day in three months.

The automakers-heavy German DAX index logged its best session since May, up 1.9%, shrugging off data that showed the country’s industrial output in August dropped the most since April last year.

Also brightening the mood were a reprieve on the U.S. debt ceiling front, after U.S. Senate leaders agreed to extend the borrowing limit into December, and fewer than anticipated jobless claims in the country were recorded.

Sika rose 3% after the Swiss construction chemicals maker said it could overcome rising raw material costs and supply chain restrictions to increase its sales and profit margins this year.

With third-quarter earnings set to kick off, analysts expect a slowdown in profit growth as a post-pandemic rebound normalises. Profits for STOXX 600 companies are seen rising 45.6%, compared with a 152.6% surge in the second-quarter, according to Refinitiv IBES data.

French luxury goods maker Hermes jumped 3.7% after HSBC upgraded the stock to “hold”, while peers LVMH, Richemont and Kering all rose about 2%.

Shares of oil major Shell recovered after it warned of a $400 million hit to third-quarter earnings from damages caused by Hurricane Ida.