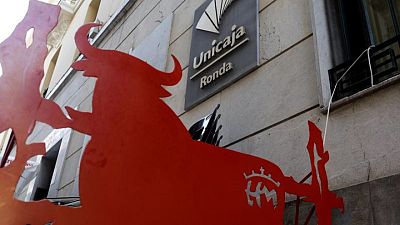 MADRID -Spain’s Unicaja seeks to cut more than 1,500 jobs, around 15% of its workforce, and close more than a quarter of its branches as part of a cost-savings plan following the acquisition of rival Liberbank, the bank and its lead union said on Tuesday.

Unicaja, which closed the 763 million euro ($885.69 million) deal with Liberbank at the end of July to create Spain’s fifth-largest lender by assets, said it would lay off 1,513 employees, confirming an earlier report by Reuters.

Union CCOO said in a statement that the lender was also planning to reduce the number of branches by 395.

CCOO, which is the main union in the financial sector, described those plans as “inadmissible.”

The combined Unicaja lender has 9,700 employees in Spain and around 1,400 branches.

Under pressure from low interest rates and the fallout from the pandemic, European banks are taking different actions to cut costs, including pursuing mergers.

The cuts at Unicaja follow similar measures from other Spanish banks such as Caixabank, BBVA and Sabadell.

Spanish banks have recently laid out plans to cut more than 15,000 jobs as they try to adapt to a shift to online banking.

Based on the outcome of previous negotiations, the actual number of job cuts could ultimately be lower.

A potential agreement with the union is a key aspect of the Liberbank deal, which is underpinned by annual cost savings of 192 million euros ($225 million) by 2023.

Around 40 million euros of those cost synergies would come from a previously announced plan from Liberbank to reduce the number of jobs by 730, and 30 million euros from a standalone plan by Unicaja to shed 437 employees.