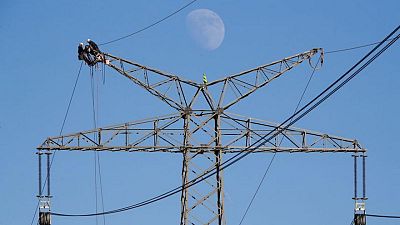 BRUSSELS – European Union governments are embroiled in talks this week on whether a surge in energy prices requires a coordinated response, as leaders weigh the potential fallout for Europe’s green transition and consumers facing the winter heating season.

EU leaders will discuss record natural gas prices on Tuesday evening and the 27 member states’ environment ministers will debate their response on Wednesday.

“The situation is becoming critical. High prices are both threatening the competitiveness of the European economy and will dramatically affect the budgets of small consumers and households,” Czech Prime Minister Andrej Babis said in a letter to other EU leaders ahead of their meeting.

The soaring costs have divided countries over how to respond, and whether Brussels should intervene.

Those pushing for EU action include Spain, whose proposals include a new bloc-wide system for countries to jointly buy gas, and France, which wants to change EU regulation to de-link the price of electricity from gas prices and tie it to the average cost of production in each EU state.

Luxembourg, Poland, Greece and the Czech Republic have also suggested a range of EU interventions for ministers to debate on Wednesday.

The European Commission will publish a guide for how countries can respond to price spikes on Oct. 13.

Not all are convinced EU intervention is needed to tackle what could be a short-lived problem. EU regulators expect gas market conditions to ease in the spring.

“It’s clear this issue affects everyone in Europe and we need an answer,” one EU diplomat said. “The question is whether the biggest member states, particularly Germany, believe this answer has to be sought in structural market reform.”

While some countries have introduced emergency subsidies and tax breaks in response to surging electricity prices, Germany, Europe’s biggest energy market, has not.

Energy costs have skyrocketed just as EU countries prepare to negotiate a raft of new policies to fight climate change, a crisis that itself cut power supplies this summer when floods swept through Germany and Belgium.

Brussels says the energy price crunch should spur a faster green transition to reduce countries’ exposure to volatile fossil fuel prices. But some governments, including Spain, have warned that high energy bills could erode public support for ambitious climate policies, if voters blame those measures.

Environment ministers will debate some climate proposals on Wednesday, including plans to phase out combustion engine car sales by 2035, in talks likely to expose where the biggest fault lines lie.