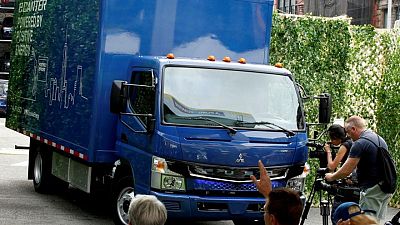 BERLIN -Daimler Trucks CEO Martin Daum said the truckmaker, set to spin-off from Daimler in December, will continue to sell fewer vehicles than it could have in the coming year as chip shortages hamper production.

“We will certainly be delivering less than we could have sold, and that also applies to next year,” he said at a roundtable with journalists on Tuesday, echoing recent warnings from competitors like Traton that profits could fall in the second half due to supply chain issues.

“It’s a fight over every chip,” Daum said.

While passenger vehicle producers such as BMW or Daimler can increase prices to offset chip losses, truckmakers do not have this flexibility, he said.

Still, the company has committed to a 15% fixed-cost reduction from 2019 levels by 2025, and cuts are “well underway”, he said. A concrete update will be provided at the company’s Capital Markets Day on Nov. 11.

Daimler Trucks & Buses, which prior to the pandemic reaped annual profits of around 2 billion euros ($2.3 billion), is set to become the world’s largest truckmaker once the spin-off from Daimler – approved by shareholders on Friday – is complete.

Between chip troubles and lacking infrastructure for the hydrogen and electric trucks it is betting on for 60% of its revenues by 2030, the newly spun-off firm is entering a challenging market.

The truckmaker will start production of its first electric truck series, eActros, in Germany this week. High production costs mean the price is roughly three times that of a diesel equivalent.

“As battery prices fall, we will certainly pass this on to our clients. But how quickly this will happen, I can’t say,” Daum said, adding that CO2 pricing was urgently needed to disincentivise the production of fossil fuel-burning cars.