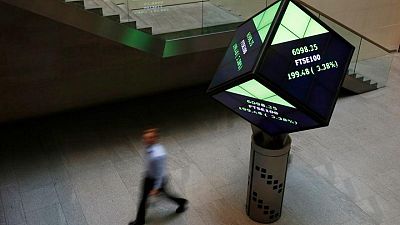 The blue-chip FTSE 100 index gained 0.9% after three straight sessions of losses, aided by over 2% jump in both banks and life insurance stocks.

“I think today is a continuing trade. Since we’ve had the Bank of England talking about rates over two weeks ago, these trades were going on and today with extra spike in yields that is just adding fuel to that sort of asset reallocation,” said Keith Temperton, sales trader at Forte Securities.

A jump in oil prices to three-year highs also supported the benchmark index, although it also fuelled inflation worries. [O/R]

The FTSE 100 index has gained nearly 9% so far this year on support from accommodative central bank policies but has traded range-bound around the 7,000 psychological level since August.

The index is around 10% away from its pre-pandemic peaks and its performance below par compared to its European regional and global peers.

“There’s still massive economic risks mounting in the final months of the year and I think it’s going to be an interesting test, but the markets are only going to pull back so far before it generates interest once more and I think we’re now approaching that point,” said Craig Erlam, senior analyst at Oanda.

Melrose Industries declined 1.1% after saying the global chip shortage led to a surge in monthly cancellations from its customers in the auto industry.