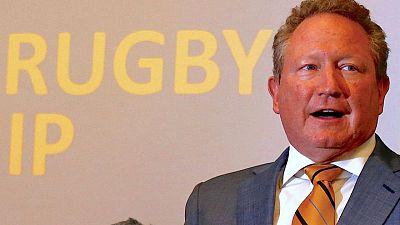 By Melanie Burton and Sonali Paul

– The world needs to focus on absolute zero emissions, rather than a net zero target, and use clean hydrogen to get there rather than relying on unproven technologies such as carbon capture and storage, Australian iron ore titan Andrew Forrest said on Monday.

Forrest, who grew Fortescue Metals Group into the world’s fourth largest iron ore miner in less than two decades, has turned his attention to developing green energy projects such as hydrogen around the world.

Australia’s richest man said the idea of reaching “net zero” by 2050 – a pillar of the upcoming COP26 climate summit in Glasgow – was a “smokescreen” that suggested climate change could be solved by burying or offsetting carbon emissions.

“It’s not going to happen,” said Forrest, speaking on a panel at the Reuters Impact conference.

“The fossil fuel industry has lobbied hard… to get taxpayers to fund their attempt at a transition to ‘clean’ energy – on their timetable. But that’s a highway to climate disaster.”

Of the 60 million tonnes of hydrogen produced every year, 96% was still made from fossil fuels, Forrest said.

“Green hydrogen is the solution we need to get to absolute zero,” he said.

Green hydrogen is made from water, using renewable electricity, while other sorts such as “blue” hydrogen are produced from fossil fuels.

The International Energy Agency backed a bigger role for hydrogen on Monday, saying governments needed to step up investment in hydrogen production and storage chains to help cut net emissions to zero.

The Australian government is pushing both hydrogen development and carbon capture and storage (CCS) to cut emissions, as it views CCS as essential to the future use of gas and coal, the country’s second- and third-largest export earners.

But the 20 pilot CCS plants in existence worldwide capture only 0.4% of the CO2 emitted globally by power stations and industrial processes, Forrest said.

“Carbon capture and storage, despite having received billions of subsidies for decades, remains an unproven failure, far from commercial viability,” said Forrest.