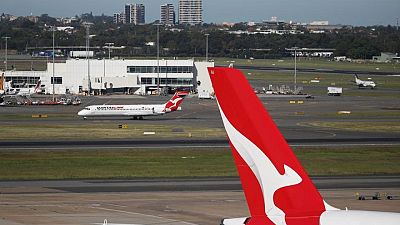 By Jamie Freed and Tim Hepher

SYDNEY/BOSTON -Qantas Airways is in talks with several planemakers over plans to renew its main narrowbody and regional airliner fleets and is expected to formalise the negotiations with a tender announcement within days, industry sources said.

The Australian carrier is studying the Airbus A220 and Brazilian Embraer’s E2 to replace a regional fleet of 20 Boeing 717s and 18 Fokker 100s, they added.

Boeing’s 737 MAX 7, the smallest member of its best-selling single-aisle family, is also seen as a contender.

In the busiest part of the market, Airbus and Boeing are competing head to head as Qantas also seeks to replace Boeing 737-800s, the oldest of which are nearly 20 years old.

The combined moves could lead to staggered purchases of as many as 100 jets including options, the sources said.

In Boston, where airline executives were gathering for an industry meeting, Qantas Chief Executive Alan Joyce declined to comment ahead of a virtual news briefing scheduled for Monday. Planemakers Airbus, Boeing and Embraer also declined to comment.

Talks over the influential airline’s business have been under way for months, but Qantas is expected to set out its requirements publicly within days as it and other airlines eye potential bargains for jets in the wake of the COVID-19 crisis.

“We’ve said for some time that the renewal of our domestic narrowbody fleet is on our agenda,” a Qantas spokesperson said.

“It’s a long-term proposition and when we have any material updates to provide, we will.”

Qantas had initially planned to place an order in 2020 https://www.reuters.com/article/qantas-fleet-orders-idUSL3N20G2W6 but that was delayed by the pandemic. Chief Financial Officer Vanessa Hudson said in February a tender would be launched this year.

Qantas budget arm Jetstar has 109 A320neo family planes on order https://www.reuters.com/article/us-france-airshow-qantas-idUSKCN1TK06Q, but the start of deliveries has been postponed until at least July 2022 due to the impact of the pandemic.

In a separate contest dubbed ‘Project Sunrise,’ Qantas selected Airbus over Boeing for jets capable of staging the world’s longest commercial flights from Sydney to London, but the plans were delayed by the pandemic.

Joyce said in August that order for A350-family jets would not be revisited until international borders reopened.

Australia said on Friday it would begin a staged opening of international borders https://www.reuters.com/world/asia-pacific/australia-ease-international-travel-curbs-sources-2021-10-01 next month but only vaccinated citizens and permanent residents would be included and they would be required to quarantine at home for seven days on arrival.

The country has not set a date for opening borders to foreigners.