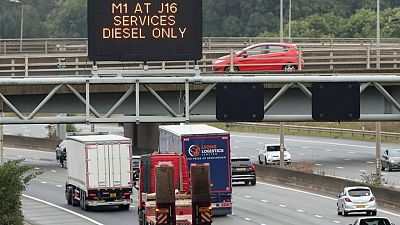 Under new immigration rules which come into force on Oct. 1 as part of post-Brexit measures to end freedom of movement, EU nationals will need a passport to enter the United Kingdom.

The International Road Transport Union (IRU) said that, despite working closely with the British government to inform hauliers, some drivers were likely to be caught out.

“Aside from not seeing the real benefits of adding this layer of bureaucracy, and potentially affecting already difficult border freight flows post Brexit, we are also concerned that passports are generally more expensive than ID cards,” said Raluca Marian, IRU EU Advocacy Director.

“UK authorities need to implement the change from Friday respecting professional drivers, without unnecessary bureaucracy or causing border or supply chain disruptions that would compound the serious supply chain issues already being seen in the UK due to driver shortages.”

The Home Office, the government department that administers immigration policy, said ID cards are some of the “most insecure and abused documents”, and the haulage industry has had almost a year to prepare for the changes.

This comes as Britain struggles with a shortage of tens of thousands of truck drivers which has led to severe supply chain issues, with fuel stations running empty in recent days after a spate of panic-buying.

Britain left the EU’s single market at the beginning of 2021, creating a full customs border with the bloc. However, London did not immediately bring in import checks on goods entering Britain to give businesses time to adjust amid concern they would lead to delays.

Earlier this month, the government said those checks would now not be introduced until next year, citing the COVID pandemic as the reason.