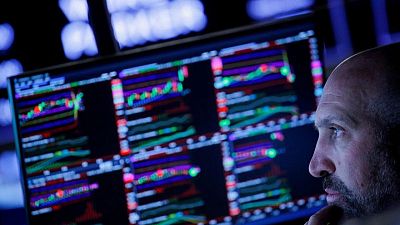 NEWYORK – The slim-but-growing possibility of a fiscal crisis if Congress doesn’t act on the debt ceiling is getting increasing attention from U.S. investors and is filtering into certain asset prices, though few believe the nation will ultimately default.

Warnings have been rung from policymakers to Wall Street bankers of the risk that talks go down to the wire. Jamie Dimon, chief executive of JPMorgan Chase & Co, said the bank is preparing for what could be a “potentially catastrophic event,” while New York Federal Reserve Bank President John Williams warned of potential negative market reaction if no solution is found to the debt-ceiling issue.

“There’s a very packed legislative calendar over the next few weeks and there are significant tail risks in the short term,” said Jon Adams, senior investment strategist for BMO Global Asset Management. “Our view is that ultimately cooler heads will prevail.”

Some signs of nervousness are showing in U.S. markets as the U.S. Congress faces a pair of approaching deadlines to fund the government and address the nation’s $28.4 trillion debt ceiling. It has a Sept. 30 deadline to avert the start of a shutdown of government services. Secretary Janet Yellen has urged Congress to act before October 18 to avert “serious harm” to the economy.

“If the government shuts down that’s not a big deal, but if they continue to play games with the debt ceiling that can cause big problems” and lead to a significant sell-off throughout financial markets, said Randy Frederick, managing director of trading and derivatives for the Schwab Center for Financial Research.

The mounting possibilities that Congress could fail to act in time to prevent a shutdown or debt default were cited by some as contributing to equity weakness in recent days. In currency markets, some analysts believe worries over the debt ceiling have helped boost the U.S. dollar.

The situation remains at an impasse. Democrats in Congress on Wednesday said they would vote to head off an imminent government shutdown before funding expires at midnight on Thursday. The House and Senate may vote on a separate bill that temporarily lifts the debt limit, but Senate Republicans refuse to vote for it.

Still, since the United States has been down to the wire on this before, investors have voiced a nonchalant view on the issue.

“It’s hard to know if the market really cares about the debt ceiling,” said Kathy Jones, chief fixed income strategist at the Schwab Center for Financial Research. “If you’re kind of rational you probably don’t, because somehow it gets resolved. On the other hand, it’s a risk you can’t ignore.”

Wells Fargo analyst Michelle Wan wrote on Tuesday that investors have “so far responded with a shrug” to the looming deadline, with complacency “rooted in past compromises that avoided defaults and other payment disruptions.”

Debt ceiling-related nervousness has, however, been showing in the Treasury bills market. Michael Purves, CEO at Tallbacken Capital Advisors in New York, wrote in a note on Monday that tension was seen in the pricing of three-month bills which “presumably won’t be burdened by default risk” compared with one-month bills. Still, that has yet to reflect the more dramatic spikes in 2011, 2013 and 2015, Purves said.

One-month bills currently yield 0.07%, higher than three-month bills which yield 0.04%. At the beginning of the year, both yielded around 0.08%.

Portfolio managers typically avoid bill issues at risk of default even if the likelihood of a failed payment is very low. This can send yields on some issues higher than those on longer-dated debt, an unusual occurrence in the yield curve, which is typically upward-sloping.

Analysts at BMO said that “as investors’ attention remains trained on Washington the distortions” in the front end of the yield curve “are likely to persist until an accord is reached.”

In another sign of concern, analysts at TD noted a sharp jump in thinly-traded U.S. credit default swaps .

Past crises have shaken the market – but only temporarily. A technical default and subsequent downgrade of U.S. debt in 2011 helped push the S&P 500 almost 20% from its high before it rebounded.

Another prolonged debt-ceiling negotiation in 2013 pushed the S&P 500 down 5.8%, but there was little market reaction to similar deadlines in 2016 or 2018 as Wall Street began to see the threat of crisis as manufactured, said Sam Stovall, chief investment strategist at CFRA Research.

Still, sensitive markets such as money markets have not shown rising levels of panic, according to Peter Crane, head of Crane Data, which focuses on the money market industry.

“They might pull up to the last minute but everybody knows both sides are bluffing,” said Crane.