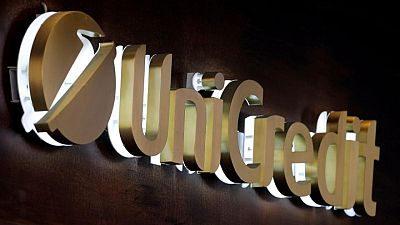 MILAN – Italy’s UniCredit is working on a scheme to offload risks on 11.8 billion euros ($14 billion) of Monte dei Paschi loans deemed in danger of turning sour as it discusses a possible acquisition of the state-owned rival, three sources close to the matter said.

UniCredit agreed to exclusive talks with Italy’s Treasury on July 29 to buy “selected parts” of Monte dei Paschi (MPS), which is 64% owned by the state following a 2017 bailout.

Discussions are expected to enter a crunch phase after local elections and a vote in MPS‘ hometown of Siena on Oct. 3-4 to assign a vacant parliamentary seat.

The sources said the transaction would see state-owned bad loan manager AMCO underwrite, together with co-investors, the riskier notes in a so-called synthetic securitisation deal, effectively taking on the risk of losses on the loans in question.

The scheme is one of several options under consideration and a final decision is yet to be taken, a fourth source said.

Unlike ordinary securitisations, synthetic deals leave the underlying loan portfolio with the bank that originated it but shift the related risks, freeing up regulatory capital.

In agreeing to discuss an acquisition targeting MPS‘ branches in Tuscany, Lombardy, Emilia Romagna and Veneto, UniCredit has set very strict terms for a deal – which must not affect its own capital.

UniCredit has said it will not take any of MPS‘ 4.2 billion euros of gross problem loans, which will go instead to AMCO, adding to 7.1 billion euros in soured loans it relieved the bank of last year in preparation for a sale of the lender.

UniCredit also said in July it had an option to discard any MPS loans it deemed too risky. Banks class loans seen in high danger of turning sour as ‘Stage 2′.

The sources said UniCredit would be shielded from the risk on 11.8 billion euros of such loans thanks to the scheme.

As of June 30, MPS held 15 billion euros in Stage 2 loans, which included 43% of loans under moratorium and 27% of loans guaranteed by the state under emergency measures deployed to counter the COVID-19 crisis.

AMCO, which has become a major player in the Italian market for problem loans by aiding troubled banks, has said it is preparing to invest in ‘Stage 2′ loans through synthetic securitisation deals.

The presence of co-investors in the junior and mezzanine tranches, which one source said could total 3 billion euros, would ensure the MPS transaction is carried out at market conditions and complies with European Union competition rules.