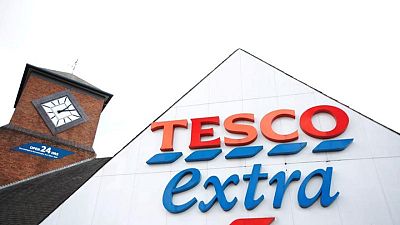 LONDON – Britain’s biggest retailer Tesco plans to expand its use of a train service to bring goods from Spain into the country which helped it cut emissions and protect deliveries through a truck drivers’ shortage, its CEO told Reuters.

Ken Murphy said in an interview for the upcoming Reuters Impact conference that the last three months had been “quite challenging” but that the supermarket had coped well due to its close ties with suppliers and detailed planning.

The group has also started using a chilled rail service to bring fruit and vegetables into the country from Spain, helping to cut the number of trucks it has on roads and guarantee deliveries.

“We’re one of the few if not the only grocery retailer in the UK that uses rail extensively,” he said. “That helped us during the HGV challenges we’ve had during the summer.

Britain has been hit by an acute shortage of truck drivers this year, with some retailers and oil companies warning this month that they were struggling to maintain full services.

On top of that, many leading companies are either under pressure to cut emissions targets, or, like Tesco, have set out plans to do so.

Murphy said that despite the challenges Tesco had done a “fantastic” job of getting food into stores while not allowing food waste to increase.