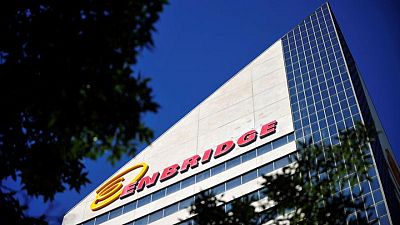 By Arunima Kumar and Rod Nickel

-Enbridge Inc said on Tuesday it had signed partnerships with Royal Dutch Shell and Vanguard Renewables to make low-carbon fuels, as the Canadian pipeline operator aims to cut its greenhouse gas emissions.

Enbridge, which set emission-reduction targets last November, hopes to be a net-zero emitter by 2050.

The company said it would buy RNG from eight anaerobic digesters that Vanguard will spend $200 million to build and operate in the U.S. Northeast, Southeast and Midwest.

RNG is produced when gas is captured from food waste, manure or landfills and turned into fuel for transportation or heating.

Enbridge can replicate the project across the United States, and could double the RNG it sells within several years, said Caitlin Tessin, Enbridge’s director of market innovation.

If natural gas prices, which are soaring, remain elevated, it could further boost demand for RNG, which normally trades at a premium, Tessin said in an interview.

Enbridge will spend $100 million on equipment to convert gas from food waste and farm manure into pipeline-quality renewable natural gas and market it to U.S. customers.

Enbridge signed an agreement with Shell to explore opportunities to produce hydrogen.

The companies are also looking at developing a carbon-capture and storage hub in southern Ontario where there are lots of industrial emissions and potential storage, Matthew Akman, Enbridge’s senior vice president of strategy, renewables and new energies, told an Enbridge forum on Tuesday.

“That’s the kind of thing where we can together really move the dial and get things going. … We’re very excited about that,” Akman said, without going into further details.

The Canadian government is pushing to provide incentives for at least two massive new carbon-capture and storage hubs by 2030 as part of its plan to cut emissions.