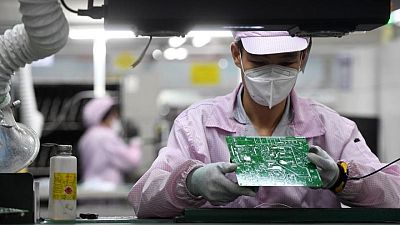 By Ryan Woo and Gabriel Crossley

BEIJING – Profit growth at China’s industrial firms slowed for a sixth month as plants fought off high commodity prices, COVID-19 outbreaks and part shortages, with an unfolding power crisis a growing threat to output and bottom-lines.

Factory output rose in August at its slackest pace since July 2020, weighed by domestic COVID-19 outbreaks, high raw material prices, and a persistent shortage of parts such as semiconductors.

A sustained crackdown this year on real estate speculation and new borrowing by developers for projects has also sapped demand for construction-related goods and services.

“We expect industrial profit growth to fall further in coming months amid a notable growth slowdown in H2 due to the recurring COVID-19 waves and Beijing’s zero-COVID strategy, likely slowing exports, and Beijing’s enforcement of property sector tightening and green measures,” Nomura wrote in a note.

High commodity prices in recent months have hurt the profitability of many medium-sized and downstream factories.

To cool prices, China will auction more industrial metals from its state stockpiles next month in a rare release of inventories. Prior to this year, Beijing had not sold off state metal reserves for more than a decade.

Earlier this month, China also released crude oil from its strategic reserves for the first time.

New headwinds are also building as China’s efforts to meet carbon emissions goals lead to wider curbs on electricity use, particularly on energy-intensive plants and businesses.

Local governments in Zhejiang, Jiangsu, Yunnan and Guangdong provinces have told factories to limit power usage or curb output. In the past week, electricity rationing has severely hit China’s northeast.

“The combined share of the industrial sector in affected provinces with power rationing is about 14% of Chinese GDP.”

Tight coal supplies and higher prices of the fuel have also eroded the bottom-lines of power companies.

For the January-August period, industrial firms’ profits rose 49.5% year-on-year to 5.61 trillion yuan, slowing from a 57.3% increase in the first seven months of 2021.

Liabilities at industrial firms rose 8.4% on an annual basis at end-August, up from 8.2% growth as of end-July.

The industrial profit data covers large firms with annual revenues of over 20 million yuan from their main operations.