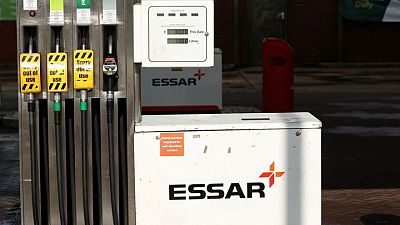 Drivers queued for hours at gas stations that were still serving fuel, albeit often rationed, as the Petrol Retailers Association (PRA) said members had reported that 50% to 90% of pumps were dry in some areas.

BP on Sunday said nearly a third of its British petrol stations had run out of the two main grades of fuel.

Royal Dutch Shell said on Monday that it had seen higher than usual demand across its network in Britain and that some sites were running low on some grades of fuel.

Diesel for road use constitutes about 40% of Britain’s petroleum product consumption, followed by gasoline which accounts for about 20%.

For a graphic on UK Fuel Consumption:

Oil product demand was hit hard by the COVID-19 pandemic, dropping by over 23% year-on-year, which forced refineries to cut production and imports to fall.

For a graphic on UK Petroleum Products:

For a graphic on UK Petroleum Product Production and Trade:

“The last few days have seen a considerable increase in people buying fuel, which has led to some confirmed forecourt shortages …, however, fuels are continuing to be delivered, meaning stocks are being replenished,” a spokesperson for UK Petroleum Industry Association (UKPIA) said.

Further statistics on Britain’s petroleum products sector is available from the UKPIA: https://online.flippingbook.com/view/570304713/5