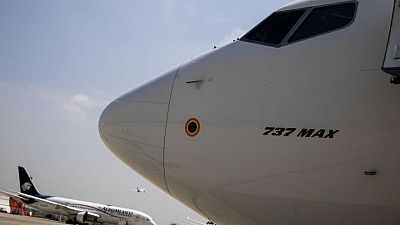 SEATTLE – Boeing Co showcased efforts to boost efficiency in its aircraft on Monday, a week after rival Airbus staged a similar conference, as global aviation faces growing political pressure to cut emissions and demands by environmental groups for curbs to air travel.

The U.S. planemaker is just one of many companies in the industry playing up its efforts to make its products more environmentally friendly, though there is debate over the speed at which new technology will be adopted.

Boeing’s event at its flight test hangar in Seattle was anchored by an Alaska Airlines 737 MAX 9 flying demonstrator equipped with potential upgrades like a drag-reducing warning light and cabin sidewalls made from recycled carbon fiber.

“Many of our improvements come with a lot of small things at once,” Boeing Vice President of Product Development Mike Sinnett told Boeing employees, industry and government officials and media gathered inside the building.

Boeing conversely has emphasized the expanded use of sustainable aviation fuels (SAF), which are made from feedstocks such as used cooking oil and animal fat, though it does not rule out generational technology leaps.

“Focusing on SAF is really important because there are thousands of airplanes already flying. The airplanes that will go into service for the next ten years have already been designed and those engines have been certified,” Sinnett told reporters later.

“To have any meaningful impact we are going to have to … expand the use of sustainable fuels,” he said, calling hydrogen and other technologies “a longer-term play.”

Boeing has promised that its fleet would fly on 100% sustainable aviation fuels by 2030.

SAF at present accounts for only a miniscule amount of overall jet fuel use and jet engines are currently certified to run on up to 50% of the fuel.

Illustrating the scale of the challenge facing the industry, the world’s two largest planemakers in 2020 delivered jets estimated to be responsible for total emissions equivalent to 600 million tonnes of CO2 over their lifetimes, a figure dampened by lower deliveries during the coronavirus pandemic.

Boeing’s 737 MAX 9 ecoDemonstrator, the latest configuration in a decade-old test program, is set to fly to Glasgow ahead of a United Nations Climate Change Conference in November, a person familiar with the plan said.