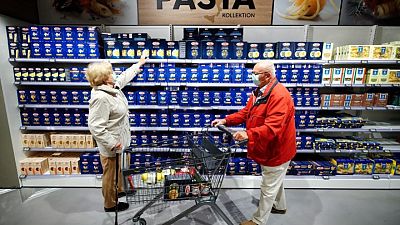 FRANKFURT – German inflation is likely to accelerate from already high levels and will stay above 2% through mid-2022, exceeding the European Central Bank’s target for the 19-nation euro zone, the Bundesbank said in a monthly report on Monday.

Inflation has surged this year on a plethora of one-off factors from tax hikes to supply bottlenecks and commodity price rises, fuelling a debate about the need for exceptionally easy monetary policy, particularly among inflation-wary Germans who already harbour some mistrust of ECB policy.

“Inflation rates between 4% and 5% are possible on a temporary basis between September and the end of the year,” the Bundesbank said. “Inflation is then likely to decrease noticeably at the start of 2022 but it will still be above 2% by the middle of the year.”

While most economists agree that the high readings of the past several months are temporary, there is a debate about how much of these one-off price pressures may translate into permanent inflation through so-called second round effects.

Even ECB President Christine Lagarde argues that “many” of the causes of high inflation are temporary, indicating that she also expects some of these factors to linger beyond the pandemic.

The ECB nevertheless expects price growth to remain weak and linger below its 2% target for years to come.

Conservative policymakers meanwhile argue that the gap between expected inflation and the ECB‘s 2% target is rather narrow, so only a few of these second round effects would need to materialize to shift inflation higher.

Conservatives are still in a minority on the ECB‘s Governing Council, however, so ultra-easy policy is likely to continue for years to come.

But the ECB is expected to end a crisis-era stimulus scheme next March and the key debate over the coming months will be whether to replace this lost support with other measures.