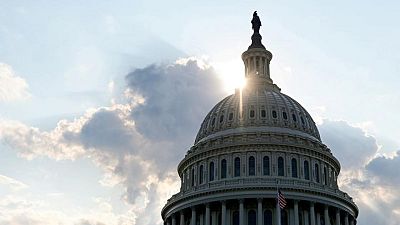 WASHINGTON – The U.S. Congress faces a pair of approaching deadlines to fund the government and address the nation’s $28.4 trillion debt ceiling that will require tricky maneuvering by President Joe Biden’s Democrats over the next few weeks.

First up is the Sept. 30 deadline to continue funding federal agencies or face the second partial government shutdown in three years, which would be an embarrassment coming at a time when Washington continues to struggle with the coronavirus pandemic and bolstering the economy.

In late October or early November, the U.S. Treasury will run out of money to pay its obligations, meaning the government faces the risk of a historic default if Congress does not act.

Here are ways both measures could get enacted into law in coming weeks:

Congress has until Sept. 30 to avert the start of a shutdown of government services, which would mean the shuttering of some national parks, fewer airport security screenings, an interruption to public health services during the COVID-19 pandemic and eventually an interruption in benefit checks to veterans and retirees and keeping national parks open.

Democrats and Republicans mainly agree on the need to act promptly to keep the government running and the House of Representatives already has approved a bill.

While Democrats have razor-thin majorities in both houses of Congress, Republicans can block the bill under Senate rules that require 60 of 100 members to agree on most legislation. Republicans say they oppose the bill because it includes a temporary suspension of the debt limit, and while they oppose allowing the U.S. government to default, they want Democrats to suspend the debt limit without their votes.

The Senate could vote on the bill as early as Monday.

If Senate Republicans carry out their threat to block the bill, Democrats will have little time to act before the government starts to shut down.

They could simply remove the debt limit provision from the bill and rush to pass the revised bill in the House and then in the Senate.

This could be accomplished in just hours, depending on how close lawmakers are to the midnight, Sept. 30 deadline and if both parties agree. But even one Republican in the Senate could slow things down by filibustering.

Democrats have two possible ways to suspend the debt limit and let it rise for a designated period of time as Congress spends more and more money with inadequate revenues to cover the bill. Goldman Sachs economists wrote in a note last week that the current standoff is “the riskiest debt-limit deadline in a decade.”

Former Treasury secretaries and Federal Reserve officials have been urging Republicans to support the increase. Democrats noted that they supported increases for Republican priorities during past Republican administrations.

Democrats could present a stand-alone debt limit increase as a gamble that there will then be so much pressure on Republicans to go along that they either vote for the bill or decline to “filibuster” it in the Senate. The latter would allow the bill to pass by a simple majority of 48 Democrats, two independents and a tie-breaking vote by Vice President Kamala Harris.

Budget reconciliation is a maneuver that bypasses the normal Senate requirement of 60 votes to advance a bill. It’s the technique that the chamber’s top Republican, Mitch McConnell, used to pass a sweeping tax-cut bill skewed to the wealthy when his party controlled the Senate in 2017. Now in the minority, he wants Democrats to use this to address the debt so that no Republicans have to vote for, and take responsibility for, a debt limit increase even though they want one.

Democrats could try to tuck language on the debt ceiling into Biden’s sweeping $3.5 trillion social spending bill. But the party is deeply divided on that bill and it’s not clear that moderates and progressives could agree on a compromise package in time to avert a default.

Another option would be to write a reconciliation bill focused on just the debt ceiling. That’s also time consuming as bills trigger a much-despised process called a “vote-a-rama” with the potential for hundreds of amendments. The Senate has held multiple all-night sessions of that kind over the past year.

A stand-alone debt ceiling increase using the reconciliation process likely would have to be approved by the Senate parliamentarian since there are tight controls on its use.

Meanwhile, the Bipartisan Policy Center now estimates that the Treasury Department will fully exhaust its borrowing capability sometime between Oct. 15 and mid-November. Unless Congress acts in time, the U.S. government likely would lapse into default.