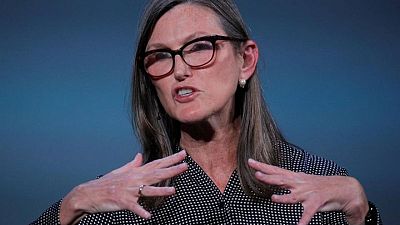 NEWYORK – China’s moves to crack down on bitcoin trading dealt another blow to Cathie Wood’s ARK Innovation Fund, which outperformed all other U.S. equity funds last year but is now mired among the worst of its peers.

Wood, who has said that bitcoin will rally to $500,000, has slightly more than $1 billion invested in cryptocurrency trading firm Coinbase Global Inc, a position that makes up approximately 4.7% of her $21.7 billion fund. Shares of Coinbase fell more than 1.5% on Friday after Chinese regulators announced a blanket ban on all crypto transactions and mining.

China’s move triggered a selloff in bitcoin, taking the value of the world’s largest cryptocurrency down more than 5% to approximately $42,475.

ARK Innovation was down 1.4% in midday trading on Friday.

The declines come as several of Wood’s top holdings this year are floundering during a market rally that has pushed up the benchmark S&P 500 more than 18% for the year to date.

While shares of Tesla Inc, Wood’s top holding, are up 8% for the year, large positions in companies including Teladoc Health Inc and Zoom Video Communications Inc are down 20% or more over the same time amid a shift away from the stay-at-home technology stocks that dominated during the COVID-19 lockdowns of 2020.

ARK Invest did not respond to a request for comment on this story.

Overall, the ARK Innovation Fund is down 4.4% for the year to date, putting it in the bottom 100th percentile among the 595 other U.S. mid-cap growth funds, according to Morningstar.

Over the last five years, however, the fund is up an annualized 42.3% a year, placing it among the top 1 percentile in its category.

That strong long-term performance is likely what is keeping retail investors from selling their stake in the fund this year despite its poor showing, said Todd Rosenbluth, director of fund research at CFRA.

“ARKK is down for the year and has significantly lagged behind index-based growth ETFs yet most investors have remained loyal, likely due to fond memories of prior periods of relatively strong performance,” he said. “But as the recent period of underperformance persists it is harder to justify not considering alternatives.”