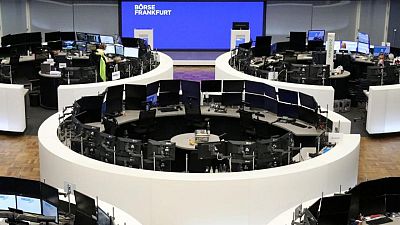 European sportswear makers Adidas, Puma and JD Sports fell about 3% each after U.S. rival Nike cut its fiscal 2022 sales expectations and predicted delays during the holiday shopping season due to a supply chain crunch.

Investor worries over Evergrande resurfaced as a deadline for paying $83.5 million in bond interest passed without remark from the company, putting it closer to a potential default.

Meanwhile, a survey by Ifo Institute showed German business morale in September fell for a third straight month, hit by supply chain woes that are causing a “bottleneck recession” for manufacturers in Europe’s largest economy.

Germany’s DAX fell 0.7%, heading into the weekend when the country will vote to elect German Chancellor Angela Merkel’s successor.

Latest polls showed the Social Democrats were clinging to a narrow lead over the conservative CDU/CSU alliance, while the Greens trailed. [nS8N2OY01Q]

“Some of the hesitancy in European markets could also be put down to the German elections, which promise to be the most interesting in some time,” said Chris Beauchamp, chief market analyst at IG.

“Markets are facing a change of direction in Germany unlike anything seen in the past decade or more, and the end of Merkel’s tenure promises to be a watershed moment for the EU and global investors alike.”

The benchmark STOXX 600 is on course to end September in the red after seven consecutive months of gains as rising energy prices and supply-chain bottlenecks fed into fears of inflation, while major central banks plan to cut pandemic-era stimulus.

However, European Central Bank President Christine Lagarde said in an interview aired on CNBC that many of the drivers of a recent spike in euro zone inflation are temporary and could fade in the next year.

British drugmaker AstraZeneca rose 2.0% after the company said its cancer drug Lynparza met its primary goal in a late-stage trial.

Italy’s utilities Enel and Eni inched higher after the government set aside more than 3 billion euros ($3.5 billion) to curb a strong increase in retail energy bills.