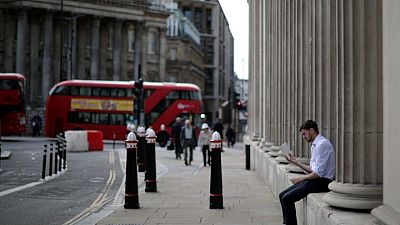 LONDON – The Bank of England kept its main interest rate unchanged at 0.1% on Thursday and stuck to its 895 billion pound ($1.22 trillion) asset purchase target.

The Bank revised down its expectations for the level of GDP in the third quarter by around 1% since the August report but traders focused their attention on the fact that another policymaker Dave Ramsden, had joined Michael Saunders in voting for an early end to the banks bond-buying programme

Below are comments from analysts on the meeting outcome:

“It is interesting that one more member of the committee voted to end QE before end of year, so there is news there. But there is also news in that the new chief economist didn’t vote to end asset purchases by year-end. “

“Certainly, the Bank of England will continue to buy bonds, which means a rate hike as soon as early as next year is premature. “

“The 7-2 vote to keep the bond-buying target unchanged very much highlights the growing hawkish tilt that the MPC is starting to exhibit and suggests the case for a policy tightening on the Committee is growing.

“Despite the downwards revision made to Q3 growth, the modest upwards revision to the 2021 inflation forecast highlights the dilemma the MPC is facing as it tries to prevent inflation from rising too far but at the same time doing nothing that potentially stifles the weakening recovery.”

“The Bank of England, in its policy decision today, clearly expects the inflation rate to be higher than previously feared. While they reiterate it will be transitory, it will no doubt be of major concern. Ultimately what is flowing through the system right now is ‘bad inflation’, that is, price rises are hitting the most vulnerable households, alongside the impacts of furlough on unemployment uncertainty.”

“Unfortunately, none of these can be solved by monetary policy and as such the BoE should be well within its rights to start tightening its stimulus policy. Unfortunately if it does not it risks doing even more damage on the social divide through ever increasing wealth inequality.

“With the ECB and Federal Reserve both announcing that they intend to begin the tapering and unwind their financial support, there is a risk that not acting in the same timeline will force UK sterling down even further – exacerbating the inflationary shock further with even higher import prices.”

“The 7-2 vote is the beginning of a shift towards higher rates and boosts the chances that QE ends earlier than expected. The text comments are looking more hawkish in my mind. We should continue to see further pound strength across the board and an increase in the chance of rate hike possibly as soon as May 2022″

“The economic data released since the previous MPC meeting has brought insufficient evidence to sway any of the Committee’s inflation sceptics or recovery bears from their already entrenched positions. Recent short-term economic indicators confirm that both manufacturing and service sectors have stalled, while the most recent retail sales data revealed that this is the first time that UK retail sales have fallen for four consecutive months in a decade.

“The bigger risk for the Monetary Policy Committee is not prevailing inflationary pressure so much as the possibility that the UK economy might slide back into recession, likely rendering the case for a base rate hike irrelevant for at least another year.”