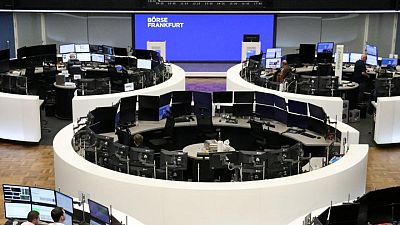 -European stocks rose on Wednesday, recovering from its early-week losses after debt-laden developer China Evergrande said it would make some interest payments, while travel and leisure index jumped to a 14-week high.

The property developer said it would make a coupon payment on its domestic bonds, offering relief to investors worried about payments default following financial troubles.

Boosting the travel & leisure index, Entain surged 6.2% to a life high after the UK gambling firm revealed a $22.4 billion takeover proposal from Boston-based DraftKings which was nearly double the bid it rejected from MGM this year.

Online betting group Flutter Entertainment gained 4.6% after it agreed to pay $200 million to the Commonwealth of Kentucky to settle a judgement reinstated last year.

The Europe-wide STOXX 600 index rose 0.5%, extending Tuesday’s bounce after its worst session in two months, with commodity-linked stocks also in the lead.

Meanwhile, in the United States, the Federal Reserve is set to conclude its two-day policy meeting later in the day, with investors expecting it to clear the way for cuts to its monthly asset purchases later this year and update its inflation and growth projections.

“Fed Chair Jerome Powell will most probably be clear on the central bank’s commitment to start lowering bond purchases before year-end but short on details about the pace and the composition of tapering,” Unicredit analysts said in a note.

“An announcement like this would be in line with Powell’s presentation at the central bank symposium in Jackson Hole in late August and is unlikely to surprise investors.”

After seven straight months of gains, sentiment has soured across global equities in September on worries about China’s slowing growth, the fast-spreading Delta variant of COVID-19 and tighter monetary policies.

The STOXX 600 is down more than 2% so far this month and is set for its worst monthly performance in about a year.

German truck maker Traton slid 0.6% after it said that sales in September were particularly hit by a global shortage of chips and other car parts.