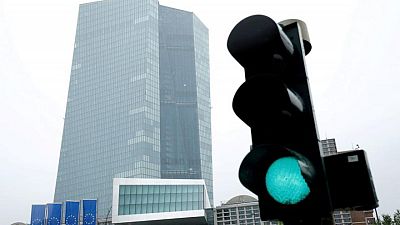 FRANKFURT – European Central Bank policymakers still see the recent inflation surge as temporary but a growing number appear to be acknowledging the risk that price growth may exceed their relatively benign projections.

Inflation hit 3% last month, well above the ECB‘s 2% target and could even climb to 3.5% by November, but the bank then sees a rapid drop that will drag price growth back below 2% for years to come.

A surge in commodity prices, supply bottlenecks and growing signs of labour shortages are however challenging this “hump-shaped” profile for consumer price growth.

ECB Vice President Luis de Guindos stuck with the ECB‘s main scenario but highlighted upside risks and warned that the bank needs to be “very vigilant” of the risk that temporary price rises could become permanent.

“Some countries in Europe have indexation of pensions and the salaries of public officials to inflation,” de Guindos told an online conference with the Financial Times.

He also warned that commodity prices and production bottlenecks risk creating “second round” effects in inflation.

Greek central bank chief Yannis Stournaras acknowledged that actual price growth could exceed the ECB‘s projection but argued that this should not force the ECB to tighten policy.

“We’ve accepted there’s an upside risk regarding inflation,” Stournaras told Politico in an interview. “In the past, however, we have over-predicted inflation [on the higher side], expecting that it moves towards 2% in the medium term.”

The ECB has undershot its target for most of the past decade and policymakers now argue that after such a long period of misses, the bank must not move early and should even tolerate a modest overshoot to ensure it does not tighten policy prematurely.