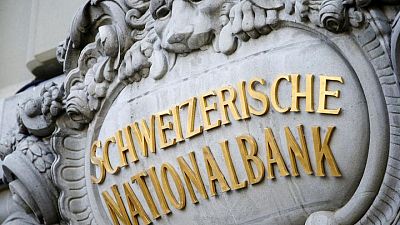 By John Revill and Elizabeth Howcroft

ZURICH – Stock market flows and overseas investment returns are emerging as major drivers for Switzerland’s currency in a shift that may already have triggered changes in how the country’s central bank responds to franc strength.

But last month as the franc rose to a nine-month high against the euro of 1.0694, there was no significant increase in banks’ so-called “sight deposits”, a usual sign of SNB activity.

Analysts said the franc’s latest spurt reflects foreign investment flows into Swiss stocks rather than speculative bets, alongside a boom in overseas stocks the SNB itself holds.

What the SNB has to say about the franc will be the focus at its monetary policy meeting on Thursday, where it is not expected to change its the world’s lowest.

At its June monetary policy assessment, the SNB raised its inflation forecasts but kept its ultra loose policy to restrain the franc. The SNB described the franc as “highly valued” and said it remained ready to intervene in forex markets as necessary.

Analysts said a shift in the drivers of franc appreciation towards equity investment, particularly into Swiss heavyweights such as Nestle and Roche, has boosted inflows. The analysts noted high demand for such defensive shares during times of uncertainty.

Switzerland’s stock exchange does not release flows data but Swiss balance of payments numbers for the first quarter of 2021 point to portfolio investment inflows of $12.2 billion, just shy of a record $13 billion seen in early-2015, Refinitiv data shows.

Junius said Swiss multinationals had benefited from the business cycle shift as the world economy cooled from its early-2021 rebound and investors moved into defensive shares.

“The SNB is probably asking, do we want to fight this? Can they do anything against the moderating of the global business cycle?” Junius said.

“Speculative flows into the franc is something you can fight, but this is a fundamental change in the economic cycle,” he added. “The SNB is having to accept this development, and has decided to stay on the sidelines.”

Evidence of SNB intervention shows up in so-called “sight deposits” – money that commercial banks park overnight with the SNB. These tend to increase when the central bank steps up its currency market purchases to dampen the franc.

But sight deposits have declined recently.

For example, total sight deposits were slightly down in the latest week ending Sept. 17 at 714.65 billion Swiss francs ($767.70 billion)) compared with a week earlier.

Another powerful driver of franc strength may come from the SNB‘s own holdings.

The SNB invests a significant amount of its foreign reserves in overseas equities and credit.

These holdings generated 43.5 billion francs in profits in the first half of 2021, versus almost 50 billion in 2019 and 21 billion last year, based on SNB data.

The SNB‘s top holdings include Apple, Microsoft, Amazon, Facebook and Alphabet, filings to the U.S. Securities and Exchange Commission showed. The combined market cap of these tech companies has grown by 34% over the past year, based on Refinitiv data.

Hedge fund Eurizon SLJ Capital said that as booming stocks and hefty dividends boost the value of the SNB balance sheet, it becomes harder for the franc to weaken.

The franc therefore is no longer a pure “fiat” currency that derives its value from the central bank’s credibility, but one backed by actual dividend-yielding foreign assets, Stephen Jen and Joana Freire, analysts at Eurizon SLJ, wrote.

“Risks to the franc may be skewed to the strong side, i.e., it will strengthen again in risk-off but may not weaken that much in risk-on,” they said.

Junius believes the SNB would be happy with euro/franc at 1.070 or above, levels that will not threaten exports.

On an inflation-adjusted basis, the franc is 5% percent overvalued versus 30-year averages. In January 2015, before the SNB scrapped the “floor” it had set against the euro, it was 13% overvalued, according to J.Safra Sarasin estimates.

Gero Jung, an economist at Bank Mirabaud in Geneva, said the SNB would probably prefer a weaker franc yet has kept interventions at low levels.

“I don’t think it’s a concerted effort to significantly weaken the franc,” he said.