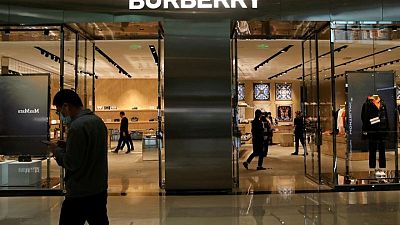 Demand for high-end products in the world’s most populous nation is the main driver for the sector, accounting for a third of European luxury goods makers’ sales in 2019 and 28% in 2020, according to UBS analysts.

Several analysts used the slide to recommend investors bet that luxury stocks’ heady resurgence from COVID-19, which saw the European sector rise 140% from March 2020 to its Aug. 12 peak, would resume.

In just one month the luxury sector’s valuation premium has fallen 30 percentage points to 74% from its August peak compared with the broader MSCI Europe index, according to UBS.

Some analysts warn that the appeal of companies such as Hermes, whose Birkin handbags sell for $10,000-plus and often have waiting lists, will take a serious hit if China pushes on with its plan to tax the rich and implement a campaign against tax avoidance.

High-end sales could be hit “if higher taxes were introduced on income, wealth, property or consumption”, said Thomas Chauvet, head of luxury goods equity research at Citi in London.

Chinese consumers could become “reluctant to buy luxury goods if they are worried about the taxman coming to see them”, said Jon Cox, head of European Consumer Equities at Kepler Cheuvreux. “This is probably going to have a negative impact on performance of some of these companies.”

Kepler estimated higher taxes for the rich could lead to a decline of between 10 to 25% in sales in China, hitting global luxury demand, which is unlikely to be offset elsewhere. That could lead to sector stagnation for one to two years, Kepler added.

Others are cautiously optimistic.

Aneta Wynimko, portfolio manager at Fidelity International, said her fund retains conviction in European luxury companies but is monitoring developments in China carefully, as they “are difficult to predict as many recent events have shown”.

“We are mindful of a possible change of sentiment of consumers towards the luxury segment,” she said, adding that Fidelity is not too worried about a spending power crash, as it seems the regulation being announced supports middle class growth.

UBS said the heavy de-rating implies that short-term China uncertainty has been priced in. There is a “good buying opportunity for high quality names”, it said, mentioning Richemont, whose shares were down 9% since its August peak.

Historically, on the back of potential concerns about a Chinese slowdown, the sector de-rated versus the MSCI Europe Index on average between 15 and 30 percentage points in line with the recent repricing, UBS analysts calculated.

They expect China’s tax adjustments to be “modest and gradual”, limiting an imminent negative impact on the sector.