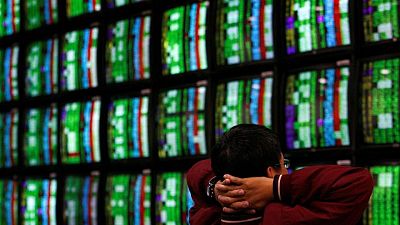 Investors purchased a net $12.26 billion in global bond funds in the week, their eight consecutive week as net buyers.

The core measure of U.S. consumer prices edged up 0.1% last month, the smallest gain since February. The August slowdown gives the Federal Reserve breathing room as it prepares to reduce its massive bond holdings and decide how soon to begin lifting rates from near zero.

Inflows into global government bond funds nearly doubled from the previous week to $1.8 billion, while purchases in inflation protected and high yield bond funds dropped more than 50% to $644 million and $20 million, respectively.

Global equity funds pulled in a net $9.1 billion, compared with $8.6 billion in the previous week, with the United States, Europe and Asia attracting a net $5.54 billion, $2.13 billion and $1.26 billion, respectively, in inflows.

Among commodity funds, precious metal funds saw net purchases of $217 million, compared with an outflow of $109 million in the previous week, while energy funds had outflows for a fifth successive week.