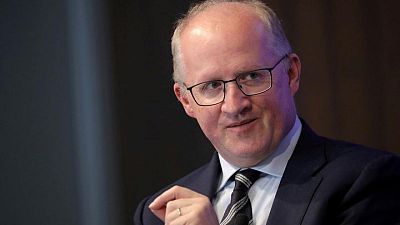 FRANKFURT -The European Central Bank is facing a call to stop the practice of holding closed-door meetings with the private sector after ECB Chief Economist Philip Lane reportedly disclosed an unpublished inflation forecast at one such event.

The Financial Times reported on Thursday that Lane had revealed in a private meeting with German economists that the ECB expects to hit its 2% inflation goal by 2025 – information that was not in the public domain and which could be used to make inferences about the future path of interest rates.

The newspaper’s report was partly disputed by the ECB, the central bank for the 19 countries that share the euro currency.

Sven Giegold, a prominent member of the European Parliament, told Reuters he would request in a letter to ECB President Christine Lagarde that such meetings be stopped.

“The ECB has to end the practice of exclusive meetings with the private sector where it is not transparent what they said,” Giegold told Reuters.

An ECB spokesperson declined to comment on Giegold’s remarks.

Euro zone government bond yields rose and the euro rebounded after the FT report was published, and did not reverse the move after the partial denial. [GVD/EUR]

The FT said Lane had told the audience that the ECB‘s “medium-term reference scenario” showed inflation rebounding to 2% “soon after the end of its three-year forecast period”.

The ECB disputed the details of the report, which it called inaccurate, and the FT’s conclusion that euro zone interest rates could be raised in 2023.

“Mr Lane didn’t say in any conversation with analysts that the euro area will reach 2% inflation soon after the end of the ECB‘s projection horizon,” an ECB spokesperson said in a written statement early on Friday.

Asked about the 2025 date mentioned by the paper, the spokesperson did not comment.

A spokesperson for the Financial Times said the newspaper stood by its reporting and article.

Giegold, the Greens’ coordinator on the European Parliament committee that oversees the ECB, said the confusion showed the ECB‘s communication approach had “totally failed”.

“You don’t know whether to believe the newspaper or the ECB‘s public message,” the German politician said.

“This approach has totally failed and the ECB has to change strategy.”

He said the ECB should either end such meetings altogether or publish recordings to avoid any confusion.

The ECB updated its economic forecasts last week, when it also reduced the pace of its pandemic emergency bond purchases. It now sees inflation at 2.2% this year, 1.7% next year and 1.5% in 2023.

The central bank has pledged not to raise rates until it sees inflation hitting 2% well before the end of its forecast horizon, which is typically between two and three years. Money markets have priced in a rate hike three years from now.

Earlier this year, Lane was forced to suspend one-on-one meetings with investors immediately following policy meetings, due in part to public criticism of such engagements. But he has still been meeting with groups of economists.

At the time ECB President Lagarde defended https://www.ecb.europa.eu/pub/pdf/other/ecb.mepletter210122_Eppink~b42eabd54b.en.pdf “exchanging views with representatives of the private sector − including financial market participants” because they help transmit the central bank’s policy to the economy.