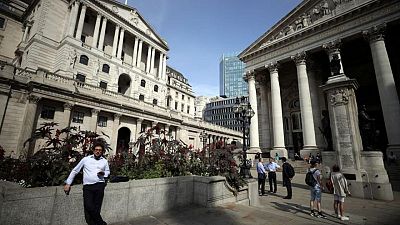 LONDON -The British public’s expectations for inflation rose last month but remained within levels seen since the start of the COVID-19 pandemic, despite a recent jump in headline inflation, a Bank of England survey showed on Friday.

Inflation expectations for the year ahead rose to 2.7% in August from 2.4% in May, according to the survey, which was conducted by market research firm Kantar. They have kept in a range of 2.4% to 2.9% since the onset of the COVID-19 pandemic.

Longer-term inflation expectations rose to 3.0% from 2.7% in May, their highest since February 2020 – not long before Britain went into its first COVID-19 lockdown.

The BoE is keeping a close eye on gauges of inflation expectations to make sure that recent price rises, caused in part by global supply chain problems, are not becoming engrained in the collective psyche of the British consumer.

Earlier this week official data showed a record month-on-month jump in the annual rate of consumer price inflation, which surged to a nine-year high of 3.2% in August – far above the BoE’s 2% target.

The central bank will set out its latest thoughts on the inflation outlook next Thursday after the September meeting of its Monetary Policy Committee.

The BoE is still braced later this year for inflation to hit 4% due to higher energy prices and pandemic bottlenecks which it expects will fade over the course of 2022.

“This mostly just seems to be a reversion to pre-Q2 levels, nowhere near ‘de-anchoring’ territory,” Alpesh Paleja, lead economist at the Confederation of British Industry, said about the BoE survey findings on Friday.

“Nonetheless, (it’s) something that the Bank will be keeping a close eye on.”