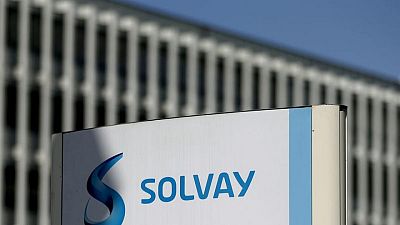 By Valentina Za and Simon Jessop

LONDON -Activist Bluebell Capital Partners has urged Belgian chemicals company Solvay to replace Chief Executive Ilham Kadri, saying she had failed to stop the discharge into the sea of waste from a soda ash production plant in Italy.

The move is part of Bluebell’s campaign aimed at creating change at companies it says are falling short on environmental, social and governance (ESG) issues and reflects a growing trend among activists to target companies over ESG shortcomings.

Bluebell began engaging with Solvay in September 2020 over the damage it says is being caused by the dumping into the sea of soda ash waste from Solvay’s Rosignano factory.

Solvay has a website https://www.solvay.com/en/rosignano dedicated to explaining the issue. It says the discharge is harmless and non-toxic, and the process complies with all relevant laws. The board chairman also said Kadri had the board’s full support.

Unlike Bluebell’s successful bid to remove the boss of French food group Danone, from which the activist investor profited, the Solvay campaign is effectively pro bono, aiming to galvanise other investors interested in sustainability issues.

In its letter to Solvay’s board seen by Reuters, Bluebell said Kadri was in “total denial” over the environmental and social impact of the discharge at the centre of the dispute.

“Any responsible CEO committed to sustainability, should stop the company from annually dumping on the shore and then into the sea up to 250,000 tons of its production wastes,” it said, adding that it should stop even though the company described the materials as non-toxic or inert.

“We at Bluebell have finally lost faith, trust, and confidence in CEO Kadri, and we urge the board to exercise its stewardship by initiating the process to empower a new leadership,” it said, adding that Bluebell had waited a year for action by the CEO but this had not been forthcoming.

Solvay’s Chairman Nicolas Boël said in a statement that Kadri had the board’s “full support”.

“Since her appointment in 2019, she has taken decisive action to shape the company’s strategy and align its portfolio with powerful sustainability trends, while also implementing an ambitious new sustainability program, Solvay One Planet,” he said.

Bluebell declined to outline its next steps.

More investors have been seeking out companies with a good ESG performance or have pushed for change at laggards.

U.S.-based activist Engine No. 1 secured support this year from investors for its bid to replace several board members at Exxon Mobil over the oil major’s handling of climate issues.

In Germany, activist ENKRAFT has taken a stake in RWE and has called for the energy firm to spin out its brown coal activities, which have weighed on its share price.