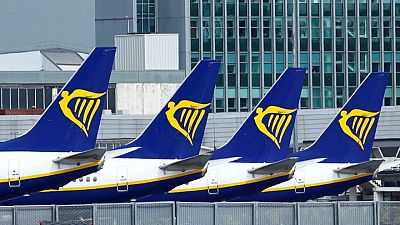 DUBLIN – Ryanair lifted its five-year passenger forecast on Thursday, saying the delivery of an existing Boeing order and increased use of older aircraft would allow it to grow faster without the need for an additional large plane deal.

Europe’s largest low cost carrier last week abruptly ended talks with the U.S. planemaker over a new order of the larger 737 MAX 10 jets, worth tens of billions of dollars, due to differences over price.

Shares of the airline jumped 7% on Thursday after it raised its passenger growth forecast.

“If we don’t do another order until 2025, frankly we couldn’t care less. The one great thing about the airline industry is we know there’s going to be another crisis in five years’ time (to drive down jet prices),” Chief Executive Michael O’Leary told an analyst call after Ryanair’s annual general meeting.

The Irish airline, one of Boeing’s biggest customers, will keep talking to the planemaker, O’Leary said in an interview, adding that relations between the two remain “very good”.

However, O’Leary has said he is willing to wait years for Boeing to drop its prices and on Thursday he said Ryanair had enough aircraft to fly 225 million passengers a year by 2026, up from 200 million previously forecast.

O’Leary told Reuters that to meet that target Ryanair would sell fewer second-hand planes, on top of the planned delivery of 210 of Boeing’s 197-seat MAX 200 model over the next five years. It may also buy or lease a small amount of current generation planes, he added.

He added that the boost to its passenger forecast reflected large pent-up demand in Europe and the gaps that have appeared as rivals fail or cut capacity.

Ryanair flew 149 million passengers a year before the pandemic and expects to fly close to 100 million in its financial year to the end of March 2022.

O’Leary said bookings over the coming months were “patchy”, with some periods of extraordinary demand around school holidays in October and at Christmas, while current prices were low.

However, he said he expected ticket prices for short-haul flights across Europe next summer to be significantly higher than they were before the pandemic because there is about 20% less capacity in the market.