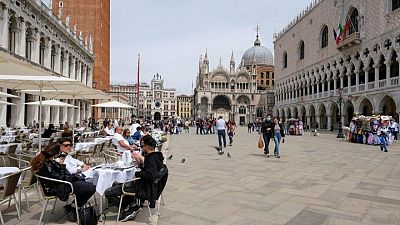 ROME – Italy’s Treasury expects the economy to grow by around 6% this year and by more than 4% in 2022, two sources close to the matter told Reuters on Wednesday, taking gross domestic product back above its pre-pandemic level by the end of next year.

The 2021 forecast is a steep upward revision from a 4.5% estimate that was pencilled in by Prime Minister Mario Draghi’s government in April, reflecting a recent spate of stronger-than-expected economic indicators.

The new growth forecasts, along with public finance targets, will be published by Sept. 27 in the Treasury’s annual Economic and Financial Document (DEF). This will form the preliminary framework for the 2022 budget.

The Treasury now estimates 4.2% growth in 2022, below the 4.8% target set in April, as the recovery from last year’s steep recession is seen flattening out after arriving more quickly than anticipated this year.

The forecasts are subject to ongoing government discussions and could still change before their publication, the sources said, asking not to be named because of the sensitivity of the matter.

Moreover, they are based on an unchanged policy scenario and next year’s projection does not include the impact of new expansionary measures which the government intends to present next month in its 2022 budget.

The final growth target for next year will therefore be more ambitious, the sources said. One of them said it could end up close to the 4.8% rate estimated in April.

Italy has consistently underperformed its European partners over the past two decades. The last time it registered growth of more than 6% was in 1976, when it surged by 6.6%.

Franco said the government planned to maintain expansionary policies to recoup the growth lost due to COVID-19 as quickly as possible.