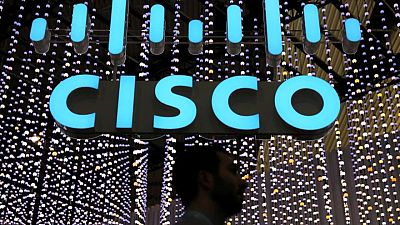 By Stephen Nellis and Sinéad Carew

– Cisco Systems Inc on Wednesday forecast that within four years, about half its revenue will come from software and other recurring sales, but its chief financial officer told Reuters high chip prices in its hardware business will keep pressuring overall profits.

Cisco is the biggest maker of networking gear for data centers and corporate campuses, but it is shifting toward selling recurring subscriptions for software such as its WebEx collaboration service and cybersecurity services.

At an event with Wall Street analysts, Cisco said it believes the portion of its revenue coming from subscriptions will rise from 44% notched for its fiscal 2021 ended July 31 to 50% by fiscal 2025.

Cisco shares closed down 0.5% at $57.56 after the event. Piper Sandler analyst James Fish told Reuters that Cisco’s outlook implies that profit margins will stay flat, but Wall Street was hoping for margin growth from Cisco’s shift to software.

Cisco Chief Financial Officer Scott Herren said the company’s software units do have higher margins than its hardware business, but some subscription revenue will also come from services that have lower margins than software.

But Herren said a global shortage of parts such as computing chips, memory chips and even power supplies will pressure gross margins in the company’s hardware business, which Cisco also forecasts will keep growing.

“The component shortages that everyone’s dealing with right now have led to price increases, and those price increases are going to be with us for quite some time,” Herren told Reuters in an interview. “We’re a (Taiwan Semiconductor Manufacturing Co) customer, and they did an across the board price increase the range anywhere from 8% to 20%. We are subject to that.”