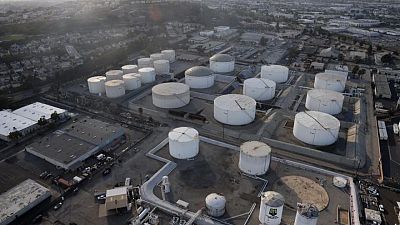 LONDON – World oil demand will rise back above 100 million barrels per day, a level last reached in 2019, as soon as the second quarter of next year, according to major forecasters, challenging views that the pandemic may curb oil use for longer or for good.

The International Energy Agency, the Organization of the Petroleum Exporting Countries and the U.S. government’s Energy Administration all updated their world oil demand and supply estimates in monthly reports in the past week.

“Economies are reopening and recovering further from the pandemic,” said Carsten Fritsch, analyst at Commerzbank. “A peak in demand and it starting to decline is still some years off.”

Before the pandemic, the rise of electric cars and a shift to renewable energy were already prompting downward revisions in long-term oil demand forecasts. As COVID-19 dented fuel use, oil companies, producers and analysts brought forward views on when demand for oil may peak.

In one such scenario from BP, COVID-19 accelerated the slowdown in oil consumption, leading it to peak in 2019. Energy consultancy DNV GL said in 2020 global oil demand and carbon dioxide emissions probably peaked in 2019.

Although trends may have been accelerated by the pandemic, such as more electric cars on the road and more employees working from home, such a peak won’t happen in 2022, according to the three agencies in their monthly reports for September.

OPEC is the most optimistic of the three on the pace of oil demand growth. The producer group sees the world using 100.15 million bpd in the second quarter of 2022, up from 100.03 million bpd on average in 2019. [OPEC/M]

“The end of fossil fuel use is far from reality,” said an official from a major OPEC producer. “Renewable sources cannot cover all usages of fossil fuels.”