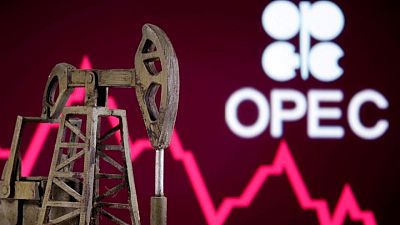 LONDON -OPEC on Monday trimmed its world oil demand forecast for the last quarter of 2021 due to the Delta coronavirus variant, saying a further recovery would be delayed until next year when consumption will exceed pre-pandemic rates.

The Organization of the Petroleum Exporting Countries (OPEC) said in a monthly report it expects oil demand to average 99.70 million barrels per day (bpd) in the fourth quarter of 2021, down 110,000 bpd from last month’s forecast.

“The increased risk of COVID-19 cases primarily fueled by the Delta variant is clouding oil demand prospects going into the final quarter of the year,” OPEC said in the report.

“As a result, second-half 2021 oil demand has been adjusted slightly lower, partially delaying the oil demand recovery into first-half 2022.”

Governments, companies and traders are closely monitoring the speed that oil demand recovers from last year’s crash. A faster return, as predicted by OPEC, could boost prices and challenge the view that the impact of the pandemic may curb consumption for longer or for good.

Oil was trading above $73 a barrel after the report was released. Prices have risen over 40% this year, boosted by economic recovery hopes and OPEC+ supply cuts, although concern about the Delta variant has weighed.

Despite the downward revision to the fourth-quarter, OPEC said world oil demand in the whole of 2021 would rise by 5.96 million bpd or 6.6%, virtually unchanged from last month.

The growth forecast for 2022 was adjusted to 4.15 million bpd, compared to 3.28 million bpd in last month’s report and an estimate of 4.2 million bpd given by OPEC sources during the group’s last meeting on Sept. 1.

“The pace of recovery in oil demand is now assumed to be stronger and mostly taking place in 2022,” OPEC said.

“As vaccination rates rise, the COVID-19 pandemic is expected to be better managed and economic activities and mobility will firmly return to pre-COVID-19 levels.”

With the latest changes, OPEC still has the highest demand growth figures among the three main oil forecasting agencies – itself, the U.S. government and the International Energy Agency, an adviser to consuming nations which issues its latest monthly report on Tuesday.

OPEC and its allies, known as OPEC+, are gradually unwinding record oil output cuts put in place last year due to the pandemic. In July, they agreed to gradually boost output by 400,000 bpd a month from August and confirmed the plan at their last meeting on Sept. 1.

The report showed OPEC output rose in August by 150,000 bpd to 26.75 million bpd, led by Iraq and Saudi Arabia. An involuntary cut in Nigeria reduced the scale of the supply boost.