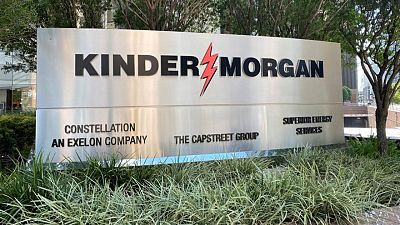 U.S. energy companies are keen to modify https://www.reuters.com/world/middle-east/exclusive-exxon-chevron-look-make-renewable-fuels-without-costly-refinery-2021-08-12 existing infrastructure to use for boosting the supply of renewable fuels that emit less carbon than traditional refined products like gasoline or diesel.

Houston-based Kinder Morgan has entered a long-term contract with Neste to make rail, trucking and marine enhancements as part of the expansion of the Harvey, Louisiana, facility, the companies said.

The tanks will be able to hold more than 650,000 barrels of oils, about one-fifth of the farm’s current capacity, the companies said.

“The U.S. has all the infrastructure in place,” said Jeremy Baines, president of Neste U.S.

The companies did not disclose terms of the deal, but Kinder Morgan said its terminal division plans to finance the project internally.

The first stage of the project is due to be complete in the first quarter of 2023.

“We’ve seen this market shift coming for quite some time,” said John Schlosser, president of Kinder Morgan Terminals, adding that the hub will lower the logistics costs for Neste.

It has been buying companies that collect used cooking oil from restaurants across the United States, including Illinois-based Mahoney Environmental in 2020 and Minnesota-based Agri Trading last week. Used cooking oil is less carbon-intense than most other vegetable oil feedstocks.

Processing it can be more profitable than for other vegetable oils because of state and federal incentives to use such feedstocks.

Refiners generate federal and state tax credits for making certain types of biofuels such as renewable diesel, which also helps them meet the requirements of the Renewable Fuel Standard.

Neste is one of a few companies that have been able to secure supply of used cooking oil. U.S. petroleum refiners such as Chevron, Marathon Petroleum Corp and Phillips 66 have made recent investments to secure soybean oil for their new refinery conversion projects.

Last week President Joe Biden said he is seeking a sustainable aviation fuel https://www.reuters.com/business/sustainable-business/white-house-targets-20-lower-aviation-emissions-by-2030-2021-09-09 tax credit as part of a $3.5 trillion budget bill being pushed by his fellow Democrats in Congress to try to lower aviation emissions 20% by 2030. The industry said the tax credit is necessary to offset the higher cost of producing the fuel.