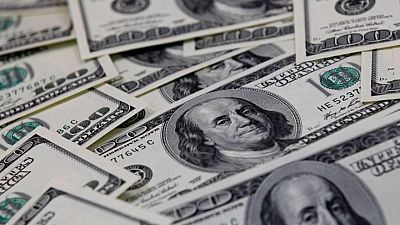 NEWYORK – The dollar climbed to a two-week peak against a basket of currencies on Monday, bolstered by expectations the U.S. Federal Reserve could reduce its asset purchases by the end of the year despite a surge in COVID-19 cases.

The greenback, however, came off its highs in afternoon trading.

A round of U.S. economic data is due out this week, starting with consumer prices on Tuesday, which will give the latest update on how hot inflation has been ahead of next week’s Fed meeting.

Philadelphia Fed President Patrick Harker became the latest official to say he wants the central bank to start tapering this year, saying in a Nikkei interview that he was keen to scale back asset purchases.

“We noticed from the Fed communication that they would like to de-link the taper from the rate hike,” Nelson said. “But it will take a lot of convincing and frankly a lot of time for the market to change its reaction function. For now, a taper timeline is closely linked to a rate hike timeline in the market.”

Tapering typically lifts the dollar as it means a step toward tighter monetary policy. It also means the Fed will be buying fewer debt assets, which suggests there will be fewer dollars in circulation.

The Wall Street Journal reported on Friday that Fed officials will seek an agreement to begin paring bond purchases in November.

Aside from inflation, U.S. retail sales and production figures are also scheduled for release this week.

“Another high CPI (consumer price index) reading this week in the face of weakening economic data could begin to paint the Fed into a corner as pressure mounts for stimulus normalization,” said Christopher Vecchio, senior analyst at DailyFX.com, the research unit of forex broker IG.

The euro was among the currencies to lose ground to the dollar, dipping to $1.1770, its lowest in a little over two weeks, after the European Central Bank said last week it would start to trim its own emergency bond purchases. The euro was last down 0.1% at $1.1801.

Litecoin, with a market cap of nearly $12 billion and one of the earliest digital currencies in circulation, fell 2.6% to $180.78, according to crypto data tracker CoinGecko, after Walmart Inc said a press release regarding the retailer’s partnership with the cryptocurrency was fake.