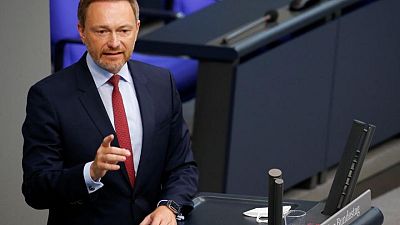 By Tanja Daube and Alexander Ratz

BERLIN – Germany’s Free Democrats, potential kingmakers in coalition talks after a Sept. 26 election, want to boost investment, their leader told Reuters on Monday, lowering the hurdles to a three-way coalition with the centre-left Social Democrats and Greens.

But Lindner made clear that the fiscal policy of a balanced budget, cherished by Chancellor Angela Merkel’s conservatives and also known as the “black zero”, was not a priority for him.

“The black zero is not our goal, the black zero has been a prestige project of the conservatives,” Lindner said.

“For us it’s important that the debt brake in the constitution must be respected,” Lindner said, opening the door for reduced deficit-spending in Europe’s largest economy.

“We want to increase investment in Germany,” said Lindner, who has voiced interest in becoming Germany’s first finance minister in the post-Merkel era.

An INSA poll for newspaper Bild published on Monday put support for the FDP at 12.5%, with the Social Democrats (SPD) leading on 26% and the Greens on 15%. Merkel’s conservative alliance was on 20.5%.

Linder said he wanted to improve conditions for private investment by implementing a “super depreciation programme” in which investments in digitization and climate protection could be written off within two years.

Finance Minister Olaf Scholz has financed COVID-19 emergency measures with record new borrowing of up to 240 billion euros this year and more than 130 billion euros last year, for which parliament suspended the debt limits in the constitution.

Scholz, the Social Democrat candidate to succeed Merkel as chancellor after the election, has proposed suspending the debt brake for a third year in 2022 to allow additional borrowing of nearly 100 billion euros.

From 2023 onwards, Scholz wants to consolidate public finances and return to the debt brake rule that would limit new borrowing to 0.35% of economic output. That would allow only reduced deficit spending of 10-15 billion euros each year.

The Greens are calling for an additional 50 billion euros a year in extra public investment over 10 years, which would be about 1.5% of 2019 output.

However, this would require a reform of the debt brake rule in the constitution – a tricky political task for which two-thirds majorities are needed in both chambers of parliament.