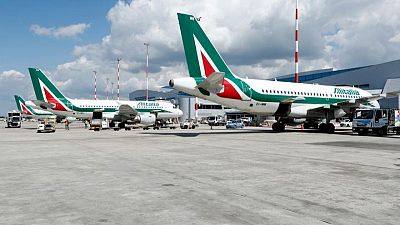 BRUSSELS/MILAN -EU competition regulators on Friday gave the green light to a slimmed down successor to Alitalia and said the new state-owned airline was not liable for repaying 900 million euros ($1.1 billion) in illegal state aid received by its predecessor.

The approval of Italia Trasporto Aereo (ITA) will be greeted with relief in Rome, which has been negotiating for months to prevent the decision on the 900 million euros of loans from hindering the launch of the new airline.

Alitalia is unlikely to repay that aid, plus interest, as the carrier’s coffers are empty and money it may collect from the sale of assets is not expected to be enough.

ITA will operate with less than half of Alitalia’s fleet of aircraft and will only be allowed to take over limited parts of its predecessor’s handling and maintenance businesses.

Alitalia’s brand and its loyalty programme will be sold in an open tender, said the European Commission, which oversees the EU’s competition policy.

The new carrier is due to start flying in place of Alitalia on Oct. 15 and plans to employ only a small part of its predecessor’s 11,000 total workforce under a new, less generous labour contract.

The uncertainty over the future of thousands of workers has sparked protests and a demonstration was underway in Rome.

“There must be no redundancies. All the (Alitalia) workers must be loaded on board,” said the head of CISL labour union Andrea Cuccello, adding the government should extend for three years a lay-off scheme for more than 7,500 workers.

Unions’ representatives will meet top officials at Italy’s economy ministry at 1300 GMT to discuss the issue.

The Italian government has set aside a total of 3 billion euros for ITA, but on Friday the Commission only gave a green light to an initial 1.35 billion euros capital injection by Rome into the carrier over the next three years.

The government will need approval from the Commission to inject the remaining 1.65 billion euros.

Alitalia was put into administration in 2017 after three failed reorganisations in the nine years since privatisation. Last year, as the pandemic foiled a planned sale to investors, the government announced its re-nationalisation.

The Commission’s assessment of Alitalia’s balance sheet at the time showed Alitalia was unlikely to be able to generate enough cash to repay the loans, nor could it sell its assets to raise enough cash for the debt repayment, the EU said.

That is the main reason why Brussels ruled the public funds were illegal state aid.

“The two public loans worth 900 million euros granted by Italy to Alitalia gave the company an unfair advantage over its competitors. They must now be recovered by Italy,” EU Competition head Margrethe Vestager said in a statement.