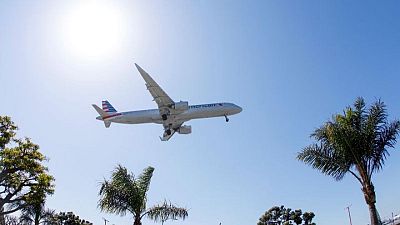 By David Shepardson and Jarrett Renshaw

WASHINGTON -Major U.S. airlines plan to announce on Thursday that they will back a voluntary industry target of 3 billion gallons of sustainable aviation fuel in 2030 as the White House looks to reduce aviation sector emissions, sources told Reuters.

Airlines for America, an industry trade group, in March had set a 2030 goal of producing and deploying 2 billion gallons of sustainable aviation fuel (SAF). SAF, made from feedstocks such as used cooking oil and animal fat, at present accounts for only a miniscule amount of overall jet fuel use.

The group declined to comment Wednesday. A White House virtual event on sustainable aviation is set for Thursday, industry and government officials said.

The target for sustainable aviation fuel will be detailed at that event, sources briefed on the matter said.

The airline group, which represents United Airlines, Delta Air Lines, American Airlines and others, will pledge to work with the U.S. government and others to help rapidly expand production and deployment of “commercially viable” SAF, sources said.

Asked for comment on the meeting, White House aide Ali Zaidi said in a statement “we need to move quickly to support the technology innovation and infrastructure needed to shift to more sustainable fuels now – and make real progress by the end of this decade.”

The White House meeting will discuss the administration’s “whole-of-government strategy to achieve a net zero carbon aviation sector by 2050″ and will include airlines, fuel providers, airports, unions, and aircraft manufacturers.

The industry participants “will share commitments to reduce emissions in the aviation sector through improvements in aircraft technology, fuels, and operational improvements,” according to an invitation seen by Reuters.

Airlines and the Biden administration back new tax credits for SAF that are expected to be included in a massive spending bill in Congress that are crucial to making the fuel economically viable.

A White House official told Reuters the administration had pushed airlines “on sustainability and the potential of reducing their emissions by 2030.”

The push to increase production of sustainable aviation fuel is also seen by the Biden administration as a way to help provide new businesses for the nation’s refining industry and the thousands of union jobs who rely on their success.

On Tuesday, Chevron Corp said it plans to produce a test batch of SAF and sell it to Delta at the Los Angeles International Airport. Delta has pledged to replace 10% of its jet fuel with SAF by 2030.