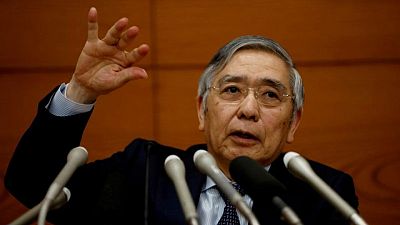 Prime Minister Yoshihide Suga’s abrupt decision to step down has heightened attention on the ruling party’s leadership vote on Sept. 29, with most candidates calling for another big spending package to cushion the blow from the COVID-19 crisis.

“Even if fiscal policy becomes more aggressive, interest rates will remain low and help enhance the effect of fiscal policy,” Kuroda was quoted as saying in an interview with the economic daily.

“I don’t think it will have a negative impact, but we will monitor market developments carefully,” Kuroda said when asked about the impact of additional fiscal spending on markets.

Kuroda warned of risks to Japan’s economy, saying the impact of a resurgence in COVID-19 infections was “highly uncertain.”

“We will continue with our current monetary easing to support corporate funding, and stand ready to take additional easing measures without hesitation as needed,” he said.

Under yield curve control (YCC), the BOJ guides short-term interest rates at -0.1% and 10-year bond yields around zero via huge bond purchases to fire up inflation to its 2% target.

The central bank also buys risky assets like exchange-traded funds (ETF), though in March it ditched a pledge to buy the assets at a set pace partly on concern over the bank’s already huge holdings that expose its balance sheet to market risk.

Kuroda said the BOJ has no plan to terminate purchases or begin selling its holdings, according to the Nikkei, countering views the March decision was the beginning of a “stealth” tapering of its risky asset purchases.