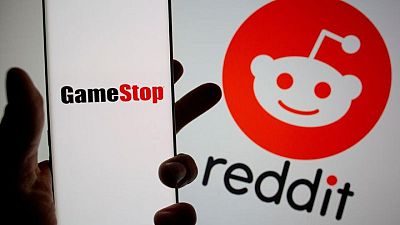 By Svea Herbst-Bayliss and Akanksha Rana

BOSTON -GameStop Corp, at the center of this year’s “meme stock” trading frenzy, on Wednesday reported a 25% jump in quarterly sales but failed to lay out fresh details about how it plans to refashion itself into a gaming and entertainment retailer.

Fresh from raising new capital and watching its share price march higher during the second quarter, GameStop executives reported that net sales, the company’s main performance metric, jumped to $1.18 billion in the three months ended July 31 from $942 million a year earlier as vaccinations encouraged people to return to its stores.

Analysts had estimated sales of $1.12 billion, according to IBES data from Refinitiv.

Despite the stronger numbers, investors reacted by pushing the shares down 7.7% in after-hours trading, complaining on the internet that the company was still not taking questions and was declining to tip its hand about future plans.

Wednesday marked the first time that GameStop’s new chief executive, Matt Furlong, spoke to investors. Furlong, who joined in June, promised that the company’s mission was still to “delight customers” and deliver value to long-term shareholders.

While the company has excited many retail investors with the prospects of building the leader in the video game business, which has higher revenue than the Hollywood movie industry, Furlong’s post-results conference call lasted less than 10 minutes and did not allow for questions.

He also provided no financial forecasts.

Early this year, retail investors hyped stocks including GameStop on news site Reddit and brokerage site Robinhood, a blow to several established hedge funds that bet the stocks would tumble and creating such a frenzy of fortunes made and lost that the U.S. Congress held hearings to investigate https://www.reuters.com/business/retail-consumer/hedge-funds-robinhood-face-grilling-by-congress-over-gamestop-reddit-rally-2021-02-18.

The quarterly results come as investors closely track chairman and top shareholder Ryan Cohen’s efforts to reinvent the company by focusing more on e-commerce while also trying to rejuvenate the physical stores after a year of pandemic-related closures.

Whether Cohen, along with his new management team, will succeed is still unclear and there were no new hints on Wednesday only weeks after Cohen said in June, “You won’t find us talking a big game, making a bunch of lofty promises, or telegraphing our strategy to the competition.”

Over half of the approximately $110 million worth of GameStop shares traded after hours on Wednesday came after the company’s conference call. Some commenters on Reddit’s wallstreetbets trading forum complained that the call was short and lacked specifics about GameStop’s turnaround strategy.

GameStop reported a net loss of $61.6 million compared with a loss of $111.3 million in the year-ago quarter. The company also reported $378.9 million in expenses, up from $348.2 in the year ago quarter. “Revenues were just slightly higher than expected and operating expenses were meaningfully higher, so losses were wider than we expected,” Wedbush analyst Michael Pachter wrote.

At the annual meeting in June, Cohen emphasized the company’s focus on “long-term growth” as it takes on both big-box retailers and works to revive its own network of stores.

Cohen, the billionaire co-founder and former chief executive of online pet supplies retailer Chewy Inc, has hired several Amazon.com Inc veterans and raised funds for his turnaround efforts through a share sale while focusing on improving the stores’ business by adding higher-margin products and better inventory.

This is GameStop’s second straight quarterly revenue beat after having missed estimates for more than two years as the company struggled with gamers shunning physical discs to download and play online, a trend that accelerated during the pandemic.

Adjusted loss per share was 76 cents, compared with a loss of $1.42 a year ago but analysts had expected a 67-cent loss, according to Refinitiv IBES data based on the work of four analysts.

The company ended the quarter with $1.78 billion in cash and with no long-term debt other than a $47.5 million low-interest loan associated with the French government’s pandemic response.