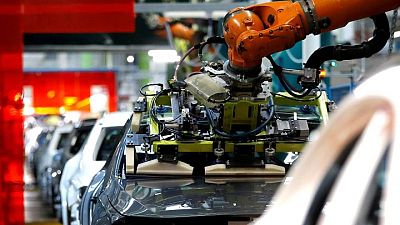 BERLIN – German industrial output rose more than expected in July after three monthly drops, data showed on Tuesday, in a sign that factories are partly overcoming supply bottlenecks which have been holding back a recovery in Europe’s biggest economy.

The Federal Statistics Office said industrial output, including construction and energy, increased by 1.0% on the month after a revised decline of -1.0% in June. A Reuters poll had pointed to a rise of 0.9%.

Output in manufacturing alone jumped by 1.3% as factories churned out more capital and consumer goods. Construction output rose 1.1% while production in the energy sector fell 3.2%.

“After the decline in industrial production in the second quarter, the third quarter got off to a friendly start,” the economy ministry said.

The mighty automobile industry increased its output by 1.9% and the equally important machinery and engineering sector hiked production by 6.9%, the ministry said.

“Even if the supply bottlenecks with semiconductors, which have slowed down production, are likely to persist for a while, the output figures suggest that industry could have overcome its low point,” the ministry added.

Many investors are still worried that supply shortages could hamper industrial output in the coming months.

A survey by the ZEW economic research institute showed on Tuesday that investor sentiment deteriorated for the fourth month in a row in September on fears that raw material scarcity and chip shortages will put the brakes on growth.

The industrial output data followed an unexpected surge in industrial orders in July, hitting a post-reunification high and pointing to a solid start to the second half in the engine room of the euro zone’s largest economy.

“Apparently companies are hoping that the supply bottlenecks for preliminary products will slowly resolve in the coming months,” Ifo economist Klaus Wohlrabe said.

The regained strength in German manufacturing comes at a time of weakness in household spending which was the main driver of overall economic growth in the second quarter.

Retail sales fell by far more than expected in July after two months of sharp increases which were caused by a pandemic-related rebound in household spending as COVID-19 curbs on shopping were gradually lifted in May and June.

Andrew Kenningham from Capital Economics cautioned that the increase in industrial production in July merely reversed the fall in June, leaving manufacturing output well below normal.

“While the rest of the economy is now close to a full recovery, supply chain problems among manufacturing companies, particularly in the auto sector, will keep GDP below its pre-pandemic level until Q4 this year at the earliest,” he said.

Capital Economics expects GDP growth to accelerate to over 2% on the quarter from July to September following a quartely expansion of 1.6% from April to June.

The government sees the economy growing 3.5% this year and 3.6% next.