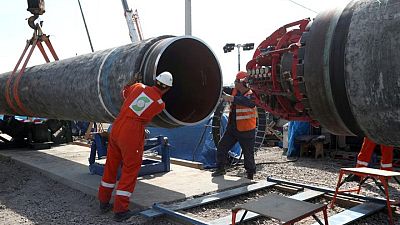 – The operator of the Nord Stream 2 gas pipeline announced on Monday that the final piece of pipe had been attached, leaving only the linking of its two long stretches to complete the project.

Gas supplier Gazprom will double its export capacity via the Baltic Sea when operations begin, which the project’s operator said it expects by year-end.

Here are some significant moments in Nord Stream 2’s development:

May: Germany’s energy regulator declines to grant a waiver of EU gas directives to the operators, while an EU court also throws out a challenge to the rules.

Sept. 23: The world’s largest group of shipping insurers says it will not insure vessels involved in NS 2.

Jan. 21: The European parliament passes a resolution calling for a stop to NS 2 completion in response to the arrest of Navalny in Russia.

May 19: The U.S. State Department waives sanctions around participants of Nord Stream 2, saying it was in the U.S. national interest.

June 7: U.S. Secretary of State Antony Blinken says completion of Nord Stream 2 is a “fait accompli”, defending the U.S. decision to waive some sanctions and vowing a response if Moscow tries to use gas as a weapon.

June 10: Nord Stream 2 says the project will start preparations to fill the first of two pipelines with natural gas within a few months.

July 22: The United States and Germany announce an agreement on NS 2 under which Berlin also pledged to respond to any attempt by Russia to use energy as a weapon against Ukraine and other Central and Eastern European countries.

Aug 20: The Biden administration slaps sanctions on a Russian ship and two companies involved in the pipeline.

Aug 25: Duesseldorf Higher Regional Court rules that Nord Stream 2 is not exempt from European Union rules that require the owners of pipelines to be different from the suppliers of the gas that flows in them to ensure fair competition.